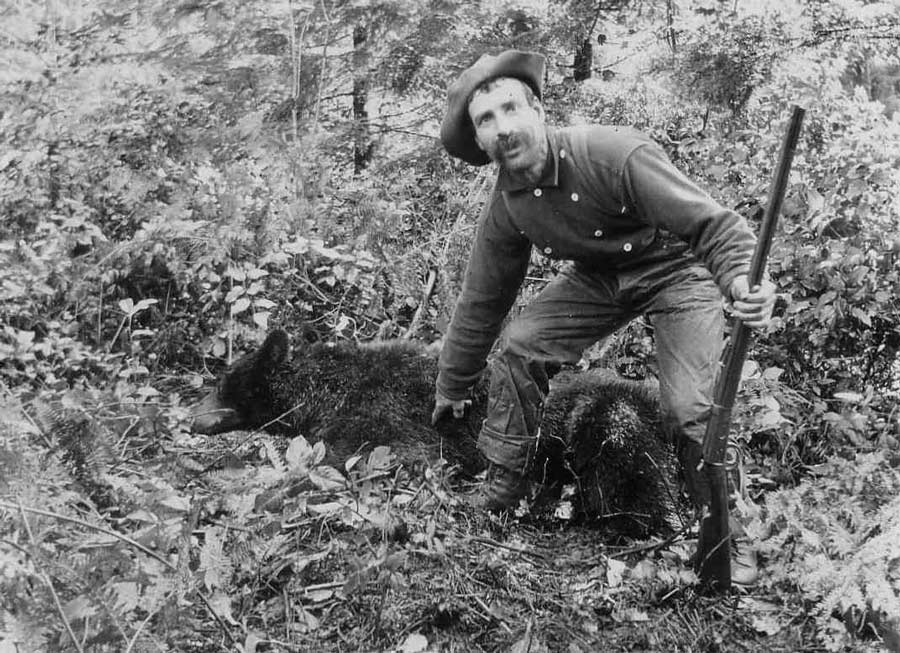 Adventures in Yellowstone author M. Mark Miller will sign copies of his book at the Old Faithful Inn Aug. 25-26. See details below.

After word spread about the magnificent big game in Yellowstone Park, hunters from the eastern United States and Europe began coming to bag a trophy. Even if they were skilled hunters where they came from, they needed someone to guide them in the rugged West. Jack Bean had the perfect credentials for the job. Before hiring out as a guide, Bean had been a trapper, hunter and Indian fighter.

In the summer of 1877, the U.S. Army hired Bean to look for Chief Joseph and his band of Nez Perce Indians along the Madison River and in Yellowstone Park. He returned to Bozeman after locating the Indians and telling the Army they were headed into Yellowstone Park. Bean discovered that a Colonel Pickett wanted to hire him as a hunting guide. In his memoir, Bean tells this tale about the intrepid colonel.

The Colonel was very anxious to kill a bear and had only seen a bear entering the brush on his previous hunting trips.

The next morning our trail led us over Mount Washburn where it commenced to snow. By the time we had reached our highest point in the trail the snow was about a foot deep. As the Colonel had only summer shoes, he had to walk to keep warm. So the Colonel stopped to dig the snow off his shoes and tie them a little tighter. I looked back behind me and saw a big bear crossing the trail. I spoke to the Colonel, “There goes a bear. ” But he kept tying his shoe. When he had finished he raised his head and with a southern accent answered me, “Whar?”

I advised him that a bear didn’t wait for a man to tie his shoe. Our trail now left the ridge and descended down to the head of Tower Creek where we saw another big bear in the trail coming toward us. So I told the Colonel, “There comes a bear.”

“Whar?” he answered so I showed him. He got off his horse and walked quietly up the trail. I watched Mr. Bear and saw him leave the trail and start up the grassy hillside.

I was afraid that the Colonel would shoot when the bear was right above him and it would come down and use him rather roughly. The Colonel saw him when he was on the hill side about 30 yards away, so I dismounted and slipped up behind the Colonel. When the Colonel shot the bear it made a big growl and came down the hill on the run and passed him within 30 feet. The Colonel didn’t know I was so close behind him until I spoke.

I told him to hold his fire until the bear jumped the creek, but he wouldn’t do it. As the bear passed the Colonel shot and missed him. When the bear crossed the creek I opened fire with my Winchester. By the time the Colonel could load and was ready to shoot again I had put five Winchester balls into him. But the Colonel gave him his last shot through the breast while the bear was falling. It rolled into the creek dead.

We found when we had examined the bear that the Colonel’s first shot just went under the skin in the bear’s neck, which caused him to come down the hill so rapidly.

I knew that the Colonel would want to take this hide along. But we only had one packhorse between the two of us and it was too loaded to carry the wet and green hide. So I decided that I had better spoil it. So I gave my knife a lick on the steel and as we got to the bear stuck my knife between the ears and split the skin down the backbone clean to the tail.

The Colonel gave me a slap on the back and says, “Bean, that’s my bear.”

I said, “Why didn’t you say so before I split the skin—why I’ve spoiled it.”

The Colonel was very much put out to lose the skin. He tramped the snow down for ten feet around and finally concluded he would take the front paw and hind foot and a good chunk of meat to eat. I only took meat enough for him, as I didn’t care for bear meat. And after dissecting the bear we journeyed on our way to the Yellowstone Falls and made camp.

That night he wanted me to cook him plenty of bear meat, but I cooked bacon for myself. I noticed that after chewing the bear meat a little, he would throw it out of his mouth when he thought I wasn’t looking. I gave him bear meat for about two days and throwed the balance away, which was never inquired for.

I’m looking forward to returning to Old Faithful In on August 25 and 26 to sign my book Adventures in Yellowstone: Early Travelers Tell Their Tales. Look for me between 10 a.m. and 3 p.m. by the clock that tells the next time Old Faithful is expected to erupt. 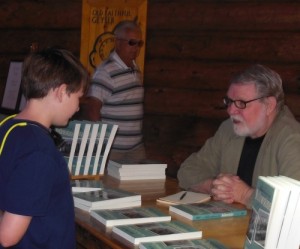 Author M. Mark Miller chats with a reader at the Old Faithful Inn during a recent book-signing. (Tamara Miller photo - click to enlarge)

I enjoy talking with anyone about early travel to Yellowstone Park, but conversations with young people, like the fellow in this photo, are the best.

“Did you write this book?” he asks.

“I did,” I confess. Then I add, “It’s a collection of adventure stories about early travel to Yellowstone.”

“Are they true stories?” he asks.

“Well,” I answer, “They’re stories in the words of the people who lived the adventures, but sometimes people exaggerate when they tell about themselves.”  I like to put it that way so people will know I didn’t make up the stories, and I can’t guarantee that every word is true.

I sense that he’s losing interest, so I add, “It’s got great adventure stories like the time  a mountain man tangled with Blackfeet or when ‘Bird’ Calfee saved a man who fell into a geyser.”

The boy brightens and turns on his heel to walk away.  “I’ll be be back,” he says over his shoulder. In a few minutes he returns with his mother—and more important her credit card—in tow.

I sign his book and add a note wishing him “Great adventures in Yellowstone.”  He leaves with a smile.

I’d love to chat with you Saturday and Sunday, Aug. 25-26 at Old Faithful Inn. But if you can’t make it, remember you can buy Adventures in Yellowstone: Early Travelers Tell Their Tales in gift shops all over the park. And it’s available at your favorite book store.  Amazon has both paperback and Kindle editions.