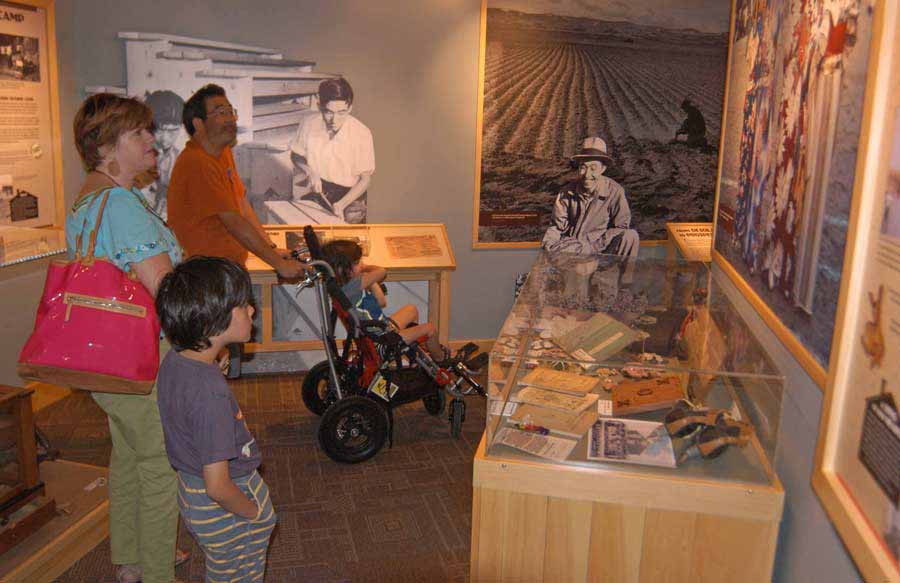 CODY, WYO. — Thousands of visitors to Yellowstone National Park this summer have also stopped off at a new attraction nearby. A former wartime internment camp museum is challenging, and perhaps changing, how some tourists — and even a few locals — view American history and current affairs.

About two-thirds of the summer visitors to the Heart Mountain Interpretive Center  are either on their way to or returning from Yellowstone, said Stevan Leger, executive director of the nonprofit Heart Mountain Wyoming Foundation, which built and operates the center. 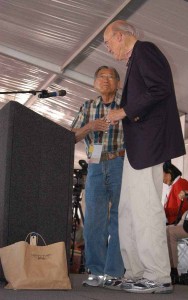 Opened last year at the site of a former internment camp where nearly 14,000 Japanese Americans were imprisoned during World War II, the center tells the story of how prejudice and racial profiling led to the construction of 10 such camps across the country, as well as what daily life was like for families at Heart Mountain.

Located about 12 miles east of Cody, Wyo., about 65 miles from Yellowstone’s East Gate, the center has proven a popular destination for people visiting the park, Leger said.

But the center has been getting a second look in recent weeks from local residents too, including a few who are unhappy about a temporary exhibit featuring self-portraits of Muslim Americans.

Created by by Todd Drake, an artist-in-residence at the University of North Carolina at Chapel Hill’s Center for Global Initiative, Esse Quam Videri: Muslim Self-Portraits shows subjects in their everyday lives, and invites viewers to consider the impact of stereotyping on American Muslims at this time in history. The exhibit is the first in a planned series at the center designed to encourage visitors to think about prejudice, stereotyping and religious, racial and ethnic profiling.

In connection with the temporary exhibit, visitors, locals and former internees are invited Friday and Saturday to a special Pilgrimage Event, including a panel discussion that examines stereotyping and civil rights in the wake of both the bombing of Pearl Harbor in 1941 and the attack on the World Trade Center on 9/11.

Former U.S. Secretary of Transportation Norman Mineta and former U.S. Senator Alan K. Simpson will headline a series of documentary film screenings and a panel discussion that explores the question: “Could this happen again?”

Mineta was interned at Heart Mountain as a boy and Simpson grew up in Cody, Wyo, less than 15 miles from the camp. The two met and shared a tent during a Boy Scout camp-out at which local Scouts joined Heart Mountain Scouts behind the barbed wire. They later served together in Congress.

In the days immediately following 9/11, Mineta opposed calls among some in the federal government to initiate profiling of Muslims boarding U.S. commercial airlines, Leger said.

“There was a lot of pressure on him at the time to do profiling of Muslims, and he stood up against that,” Leger said, adding that Mineta will discuss the issue Friday during the panel discussion. 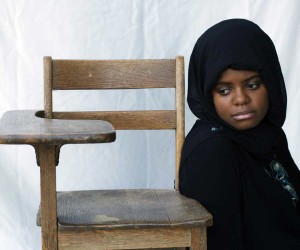 A temporary exhibit at the Heart Mountain Interpretive Center near Yellowstone Park features self-portraits of Muslim Americans, including one by Halona, a girl who has suffered discrimination in the classroom and is now taking online courses. (courtesy photo - click to enlarge)

Some local residents have written letters to the editor opposing the exhibit of Muslim American self portraits, citing reasons mainly focused on claims that Islam is a “violent religion” and that such an exhibit is inappropriate at the center. Others have written and spoken out to defend the exhibit, pointing out the obvious connections between the experiences of Muslim Americans after 9/11 and Japanese Americans after Pearl Harbor.

“To the extent that some people are upset or stirred up, at least we have started a conversation about this,” Leger said. “That’s part of our mission here, to encourage people to think about these issues.”

In addition to the film screenings and panel discussion, the Pilgrimage Event, now in its second year, offers former internees and family members a chance to reconnect at the Heart Mountain site, something many have done there and elsewhere around the country in the years since World War II.

“We believe that by remembering one of the ugliest times in our history and ensuring that the younger generations understand how racism led to the forced relocation of thousands of Americans just two generations ago, we help to ensure that we never have a repeat of these kinds of events,” said Shirley Ann Higuchi, chair of the foundation’s board of directors and the daughter of Heart Mountain internees.

Ken Watanabe’s film, America: Japanese Americans and Post 9/11 America, is open to the public and will screen at 7:30 p.m. on Friday, Aug. 10 in the Wynona Thompson Auditorium in Cody, Wyo.. The film will be followed by a panel discussion with Mineta, Simpson, Higuchi and others. Also on Friday, the Heart Mountain Wyoming Foundation will host a reception and dinner from 4 to 7 p.m. at the Holiday Inn in Cody. The cost for the dinner is $90 for adults, $60 for children.

On Saturday, two additional films will be screened at the Heart Mountain Interpretive Center, along with walking tours, art exhibits, tours of the Heart Mountain hospital complex ruins, book signings, live music and activities for children. A $20 fee covers admission to Friday’s film and discussion event and all Saturday events. For more information or to register, visit the Heart Mountain Foundation Wyoming web site.

Esse Quam Videri: Muslim Self-Portraits is on display until September 18.

One thought on “Heart Mountain center near Yellowstone challenges views on profiling, prejudice”