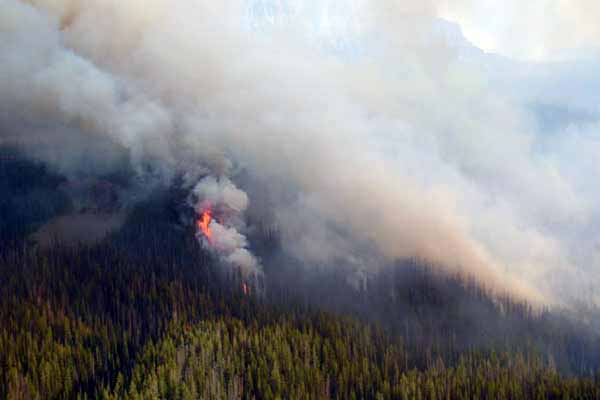 The North Buffalo Fire in the Bridger-Teton National Forest is among many in the greater Yellowstone area producing smoke and haze in gateway communities.

CODY, WYO. — Heavy smoke around the greater Yellowstone area is the result of fires burning in and around Yellowstone and Grand Teton national parks, but all major roads and campgrounds remain open heading into the Labor Day holiday weekend.

Fire danger in the parks and surrounding forests remains very high or extreme, and most public lands have implemented fire restrictions banning open campfires in the backcountry.

Much of the smoke visible downwind from Yellowstone, including in Park County, Wyo., is from fires in the park, as well as in the Bridger-Teton National Forest, according to officials at the Cody Interagency Dispatch Center. No known wildand fires were burning in Park County as of 7 p.m. Tuesday.

In Yellowstone Park, the 1,500-acre Cygnet Fire burning five miles southeast of Norris Junction is producing significant smoke that may be visible from areas around the park. Firefighters continue efforts to protect a utility corridor south of the road between Norris and Canyon.

Sparked by lightning and discovered Aug. 10, the Cygnet Fire has prompted closure of a section of the backcountry trails and campsites along the Canyon-to-Norris road. Visitors are asked to use caution while driving where firefighting crews are working along roadways.

Other smaller fires under 200 acres in size also continue to burn in Yellowstone.

The Range Fire burning eight miles southwest of Tower Fall was discovered on July 26. The fire is not threatening structures or roads, but will probably continue to produce a significant amount of smoke that will be visible from the road over Dunraven Pass and possibly through the Tower Fall area.

In the Bridger-Teton Forest, the 7,500-acre North Buffalo Fire is burning one mile north of confluence of the Soda Fork and North Fork of the Buffalo River in the Teton Wilderness. The fire is active in the Soda fork, Joy Creek and North Buffalo Fork.

The 6,500-acre Bear Cub fire on the Buffalo District of the Bridger-Teton Forest is also burning in the Teton Wilderness Area, near Pendergraft Meadow.

For details on Yellowstone backcountry and trail closures, call 307-344-2160. Additional information on is available 24-hours a day by calling 307-344-2580, on the web or on Twitter @YellowstoneNPS.