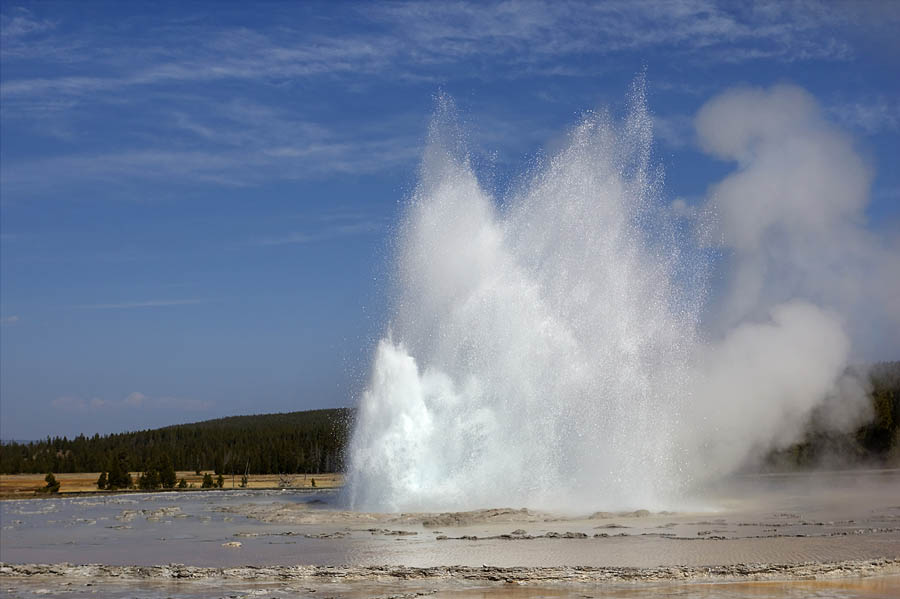 The geysers and other thermal features of Yellowstone National Park make up a vast, complex and dynamic collection of constantly changing natural wonders. A wide range of amateur hobbyists and professional geologists and hydrologists regularly track the activities and changes in Yellowstone’s thermal features and post their findings at various sites online. Here’s a look at October’s thermal activity.

October saw quite a few interesting changes, and based on reports, would have been a great time to head to Yellowstone to see things in person. The first snowfall of the season came to Yellowstone and closed some of the entrances in October.

A swarm of small earthquakes occurred in the middle of the month. October 14th saw the most of these small earthquakes, which were located about 2.5 to 3 miles west-southwest of Old Faithful. Most were less than 3.0 in magnitude. These types of swarms are normal for the park. Sometimes they appear to affect the behavior of geysers and hot springs, and at other times, no connection can be found.

Large earthquakes, though, usually do affect the behavior of geysers and hot springs. That was seen on Oct. 28 when a 7.7 magnitude earthquake hit Canada. While Yellowstone’s thermal features didn’t show a reaction to it, some popular hot springs in British Columbia stopped flowing completely.

In the Upper Geyser Basin:

Plume Geyser, which stopped erupting on Sept. 6, ended its nap on Oct. 24. The reawakening was captured on the live streaming camera. Plume is found on that video just over the “shoulder” of Old Faithful Geyser, the prominent cone showing closer to the camera. During its nearly month-and-a-half of relative quiet, it still grumbled just below the surface. No word if that grumbling continues. The last couple of days of the month, the intervals between reported eruptions were around 2 hours. 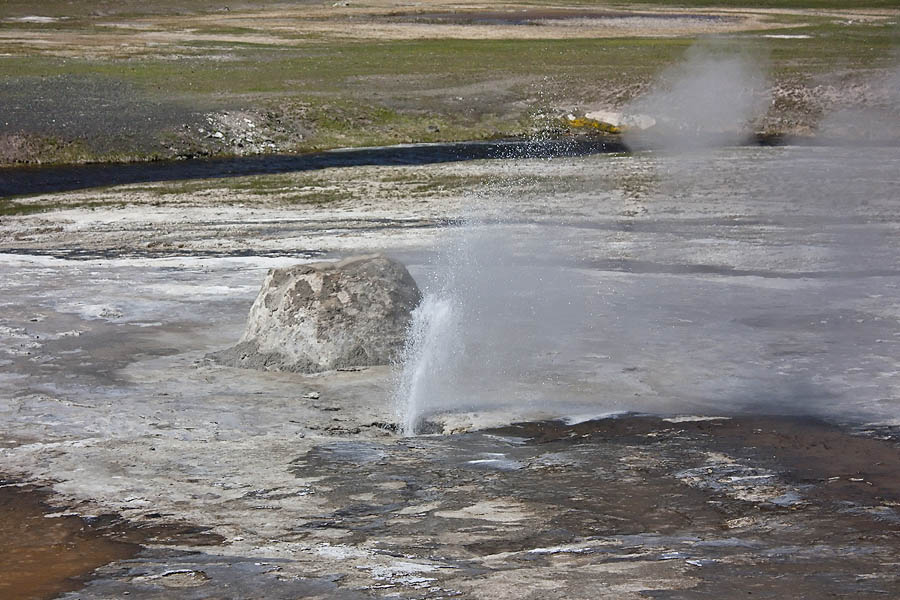 Beehive's Indicator is a small geyser that usually erupts 5-20 minutes prior to an eruption of Beehive Geyser. (Janet White/Geyser Watch - click to enlarge)

Just down from Plume, Beehive Geyser erupted a couple of times without being preceded by an eruptions from Beehive Indicator. One such eruption was seen on the Oct. 17 and another on the Oct. 20. Any change like this raises hopes that perhaps Giantess will make an appearance, since apparent connections between the two exist. While this isn’t any solid indication, it’s at least an interesting thing to note. The last eruption of Giantess occurred over a year ago, on Sept. 13, 2011.

Lion Geyser erupted at least once almost every day in October, but it’s hard to pinpoint how many eruptions each series encompassed, or the interval between them, without confirming electronic recording data. But Lion at least seems quite active.

Grand Geyser has lengthened its pace again, and the Visitor Education Center quickly adjusted the window of opportunity for the prediction to match the change of pace that started on the October 23. They’re using a 2-hour window with the prediction in the center, and expecting about 7.25 hours between Grand’s eruptions.

News from the Lower Geyser Basin:

Great Fountain, along Firehole Lake Drive, went into what’s known as a “wild phase” on Oct. 20 when it erupted nearly continuously for many hours, pausing only a few times. As far as anyone can tell from the observations shared, this wild phase very likely lasted two days before Great Fountain was seen empty and quiet on Oct. 22.

Snow covered Great Fountain’s platform, giving a clear indication if an eruption had occurred, and at least one knowledgeable geyser enthusiast enjoyed watching it melt away in what was the first overflow leading to an eruption after the wild phase on Oct. 26.

Morning Geyser erupted twice on October 30. The first eruption was already underway when first seen at a couple of minutes before 9 a.m. The eruption continued for another 20 minutes. But not only did Morning Geyser erupt, but Fountain Geyser also joined in at the same time, giving a rare ‘dual eruption’ not seen in many years.

A little over five hours later, Morning Geyser had a second eruption, but this time it erupted alone and the duration of the eruption lasted 7 minutes. No further eruptions have been seen.

Thank you to all who share their observations, it’s nice to get an idea of what the geysers are up to these days.

Janet White is the creator of GeyserWatch.com and appreciates any reports on unusual or interesting activities by Yellowstone Park thermal features.