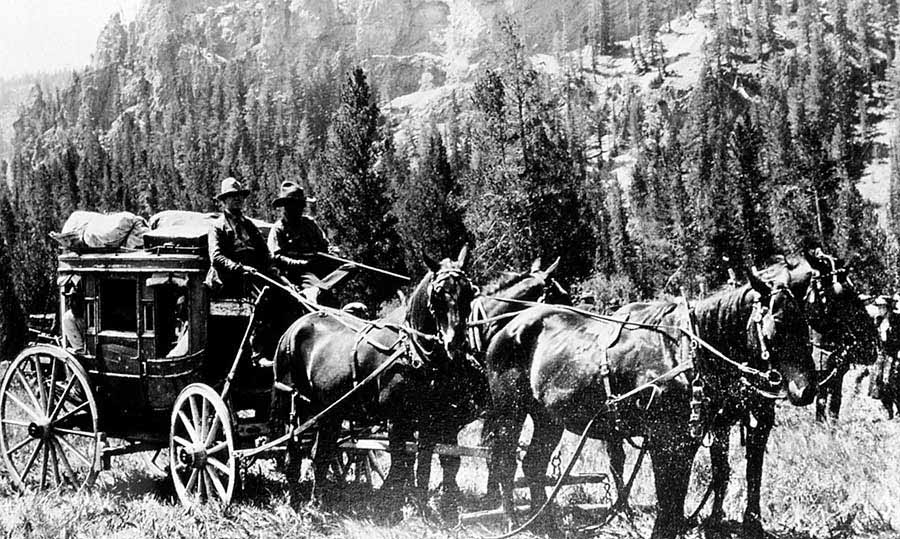 Horse-drawn coaches were the common method for travel in the early days of Yellowstone National Park. (Yellowstone Digital Slide File - click to enlarge)

Before completion of the Nothern Pacific’s transcontinental railroad in 1883, many early Yellowstone visitors often came long distances by stagecoach—and that wasn’t always safe. In 1872 a young Englishman named Sidford Hamp, who had spent the summer working on the second Hayden expedition documenting Yellowstone Park, told about a stagecoach robbery in a letter to his mother.

About 8 o’clock that evening on October 16, I was asleep when suddenly the coach stopped, which woke me up. I was going to look out (for the blinds were down) when I heard some one outside say, “Put in your head there! Put in your head!”

In a little while the voice said again, “get out one at a time and throw up your hands.” I knew in an instant that the coach was stopped by highwaymen. One of the passengers got out—and then I did—and all the others followed and stood in a row with their hands over their heads.

There were seven of us besides one on the box with the driver and a lady and child inside. When we were outside, I had time to look about and the first thing I saw was a man with a double-barreled shotgun—full cocked pointed at the driver. Another man behind the coach had two six-barreled pistols in his hand.

I took the end nearest the shotgun man, so that I could see what he was up to.  When we were all out the man with the pistols told the coachman to throw out the treasure boxes, which he did. He then took a small hatchet he had with him and split them open but there was nothing in them.

Then he came to us and searched us. He began with me, he first took out my watch, but he only looked at it and put it back, and said he didn’t want it. Then be felt in my other pockets and found a leather case in which I had $8 and all my letters. I told him there was only $8 in it and he said if he thought so he would give it back.  I asked him to look inside but he wouldn’t. He asked me what I had been doing as I only had $8 so I told him I was traveling with another fellow. I had 2 pound 5 shilling notes in watch pocket, which he didn’t find.

They then took the candle out of the coach lamp and searched inside the coach. The man on the box had a bottle of whiskey, which the robbers took from him and handed round for the passengers to drink. I took some just for the joke of it and because I was cold with standing out with my hands up. Fancy such a thing as a highway robbers in England.

Read more tales of early travel in Yellowstone like this excerpt from  Sidford Hamp’s Diary, published in Annals of Wyoming, in M. Mark Miller’s Adventures in Yellowstone: Early Travelers Tell Their Tales.