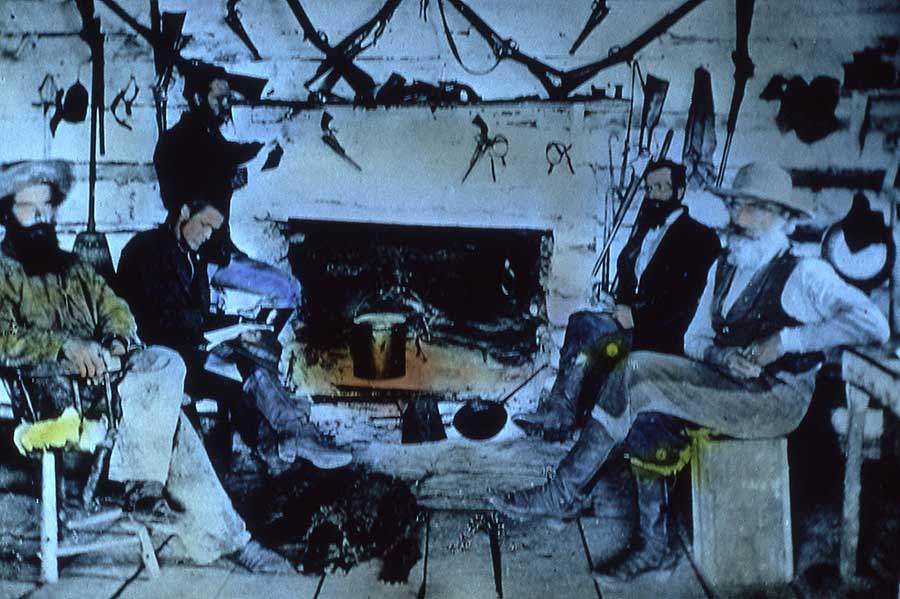 Most of the tales I post here come from my collection on early travel to Yellowstone National Park that I assembled for my Humanities Montana presentations. I focus on first-person accounts and let people tell about their adventures in their own words. But often very interesting people never wrote their own story, so I write one for them. Gilman Sawtell is such a person.

Most of the earliest park tourists came from Montana because that’s where the access rivers ran. The north entrance via the Yellowstone River was 60 miles from the farm town of Bozeman, and the west entrance via the Madison was 90 miles from the gold rush town of Virginia City. Both rivers flow through rugged canyons that made travel difficult. In fact, the Madison Canyon was so bad that early travelers chose to cross the continental divide twice to avoid it. But that was a small sacrifice. Passage over the Raynolds and Targhee Passes was relatively easy. Besides, traveling this route provided the reward of a stop at Henry’s Lake.

Many travelers left glowing descriptions of Henry’s Lake. The four-mile long lake is surrounded by stately mountains and fed by snowmelt streams and cold springs. Travelers praised the spot as a paradise for game and waterfowl. It was a haven for birds, and filled with magnificent trout. Travelers usually spent several days there hunting and fishing and lolling in the sturdy log structures built by Gilman Sawtell.

Sawtell was a blue-eyed blond who came west with his wife and son after serving as a Union soldier in the Civil War. He prospected for gold for a while, and in 1867 he began homesteading at Henry’s lake. Sawtell left his mark in many ways. His main business was harvesting and selling fish—as many as 40,000 pounds per year. To make his commercial fish business work, Sawtell had to keep his product fresh and haul it to distant markets.

Sawtell sawed blocks of ice from the lake in winter and stored them packed in sawdust in an sturdy, thick-walled icehouse he built of logs. He speared fish and stored them in the icehouse until he had enough to fill his wagon. In the 1860s, Sawtell sold his fish for top prices in Virginia City. He had to build his own road to get there. As late as 1896, Sawtell was still hauling fish to Monida, where they were loaded into railroad cars for sale in Butte and Ogden.

While launching his fish business, Sawtell built a veritable village. By 1871 he had six well-built log buildings: a residence, a blacksmith shop, a stable, a storage shed for skins and game, and his icehouse. In addition, he farmed crops of hay, grain and vegetables.

It’s not known when Sawtell began visiting Yellowstone, but he was telling stories about geysers by the mid 1860s. In 1873 he contracted with Virginia businessmen to build a road from his ranch over Targhee Pass to the lower geyser basin. This was called “The Yellowstone Free Road” to distinguish it from the toll road Bozeman businessmen were building along the Yellowstone River to Mammoth Hot Springs. The race for tourist dollars was on.

In 1871 Sawtell guided a group of businessmen from Deer Lodge and Virginia City on a tour that covered the geyser basins, Yellowstone Lake, and the Grand Canyon of the Yellowstone. This trip made Sawtell the first commercial guide to Yellowstone. Several of these travelers described the trip in newspapers articles. These articles appeared in Virginia City, Helena and Deer Lodge. They fueled Montanan’s interest in visiting the upper Yellowstone and encouraged the U.S. Congress to establish the national park. The most extensive account of this trip was written by Calvin C. Clawson, a reporter for The New Northwest, a Deer Lodge newspaper.

Read more about the early explorers and visitors in Yellowstone Park in M. Mark Miller’s Adventures in Yellowstone: Early Travelers Tell Their Tales.