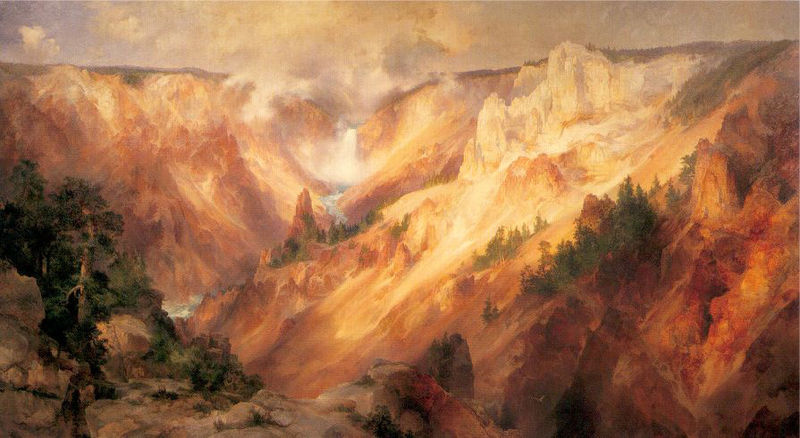 The Grand Canyon of the Yellowstone, a painting by Thomas Moran.

Carrie Strahorn was an adventurous woman who insisted on traveling with her husband  Robert  (she called him “Pard”) as he traveled the country searching for destinations for the Union Pacific Railroad. Carrie wrote newspaper columns about her adventures and eventually collected them in a book, Fifteen Thousand Miles by Stage.

Despite warnings about winter storms, the Strahorns decided to visit Yellowstone Park in October 1880. Their guide was George Marshall, who operated a stage line between Virginia City, Montana, and a hotel he built at the Lower Geyser Basin. Also, Park Superintendent Philetus Norris accompanied the Strahorns during  part of their trip.

The weather was fine when the Strahorns began, but as they returned to Marshall’s hotel after visiting the Mammoth Hot Springs, a snow storm caught them. Here’s Carrie’s story about that.

The rain changed to snow, and through the storm we saw the disconsolate face of Mr. Marshall, as he stood near the smoldering campfire muttering to himself as if he had become demented. Upon inquiring the cause of his trouble, he said as soon as he saw the snow, he went to look for the horses—and they were gone.

“Gone!” we all exclaimed in unison and despair. The horses were gone and we were at the end of our rations with a big storm upon us. The many warnings not to go into the park so late went buzzing through our minds like bumblebees. The snow was several inches deep and falling faster every minute.

As soon as daylight came the men started in search of the horses. I was left all alone in the camp for several hours waiting with my rifle in hand, until after a hard and hurried chase the horses were overtaken and brought back. We knew that we should hurry home as quickly as possible—but to be within five miles and not to see the falls was asking too much. With the return of the horses we resolved at once to go on.

Superintendent Norris thought it was not best for me to go to the falls. The trip must be a hasty one, and the start home not to be delayed longer than possible for fear of continued storm. The snow ceased falling soon after daylight, but the sun did not appear and there was every indication of more snow. Pard was reluctant to leave me, and knew what disappointment lurked in my detention, but he was overruled. With Mr. Norris he started off leaving me with Mr. Marshall—who was to have everything ready for the return to Fire Hole Basin on their return.

The more I meditated the more I felt that I could not give up seeing the canyon and falls. To be balked by a paltry five or ten miles was more than I could stand. I called to Mr. Marshall to saddle my horse at once for I was going to the falls.

He laughingly said “all right,” but he went right on with his work and made no move toward the horse. I had to repeat the request the third time most emphatically and added that I would start out on foot if he did not get my horse without more delay.

He said I could not follow them for I would not know the way, but I reminded him of the freshly fallen snow, and that I could easily follow the trail. He was vexed with my persistence as I was with his resistance, and he finally not only saddled my horse but his own, and rather sulkily remarked that if the bears carried off the whole outfit I would be to blame. When well on our way I persistently urged him to return to the camp and he finally did turn back, but waited watched me until I turned out of sight.

Alone in the wild woods full of dangerous animals my blood began to cool, and I wondered what I should do if I met a big grizzly who would not give up the trail. The silence of that great forest was appalling and the newly fallen snow made cushions for the horse’s feet as I sped noiselessly on. It was a gruesome hour, and to cheer myself I began to sing, and the echoing voice coming back from the treetops was mighty good company.

The five miles seemed to stretch out interminably. When about a mile from the falls other voices fell on my ear, and I drew rein to locate the sound, then gave a glad bound forward, for it was Pard on his way back. Mr. Norris said anyone might think that Pard and I had been separated for a month, so glad were we to see each other.

Pard could not restrain his joy that I had followed, and sending the superintendent on to the camp he at once wheeled about and went with me to the falls and canyon that I came so near missing. Up and down o’er hills and vales we dashed as fast as our horses would carry us the upper falls were reached where we dismounted and went tip to the edge of the canyon to get a better view.

These falls are visible from many points along the canyon, and the trail runs close to them and also by the river for several miles, [offering] the tourist many glimpses of grandeur. Above the upper falls the river is a series of sparkling cascades, when suddenly the stream narrows to thirty yards, and the booming cataract rushes over the steep ledge a hundred and twenty feet and rebounds in fleecy foam of great iridescence. The storm increased and the heavens grew darker every hour, but we pushed on.

Moran has been chided for his high coloring of this canyon, but one glimpse of its rare, rich hues would convince the most skeptical that exaggeration is impossible. We longed to stay for days and weeks and hear this great anthem of nature and study its classical and noble accompaniment, but there was a stern decree that we must return, and that without delay.

There was no hope for sightseeing as we kept on our way back to the Lower Geyser Basin. Without giving our horses or ourselves over half an hour to rest at noon, we rode on and on, up hill and down, through woods and plains, fording the Fire Hole River again and again, until at last the lights of Marshall camp were in sight. The storm had continued all day, turning again from snow to rain in the valley. How tired I was when we rode up to the door. Our forty-mile ride was ended at seven o’clock, but it took three men to get me off my horse.