Yellowstone National Park Ranger Brad Ross was recognized Monday at the National Parks Day luncheon in Cody for an award he received recognizing valor in the line of duty.

Business people and tourism representatives applauded the ranger upon learning he was one of 17 park system employees from across the nation honored by Interior Secretary Sally Jewell with the Valor Award. 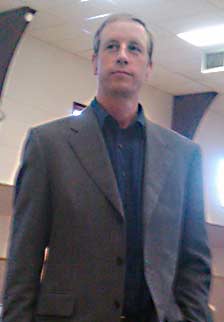 A number of National Park Service employees and partners were recognized at the Department of the Interior’s 69th Honor Awards Convocation earlier this month.

Ross demonstrated unusual courage in the face of danger, the criterion for the award, when he responded to a 2011 avalanche at Sylvan Pass that created a 30-foot high roadblock.

Ross directed 25 vehicles with visitors out of the danger zone, searched for possible victims, coordinated the responding units and got the road closed, the Department of Interior said.

“His situational awareness, experience and judgment prevented serious if not fatal, consequences as three other large avalanches occurred within 20 minutes,” a department statement said.

Yellowstone spokesman Al Nash said earlier in the week that Ross, a Lake District ranger with close ties to the Cody community, would likely be honored later this year in a separate event, and would be made available then for comment.