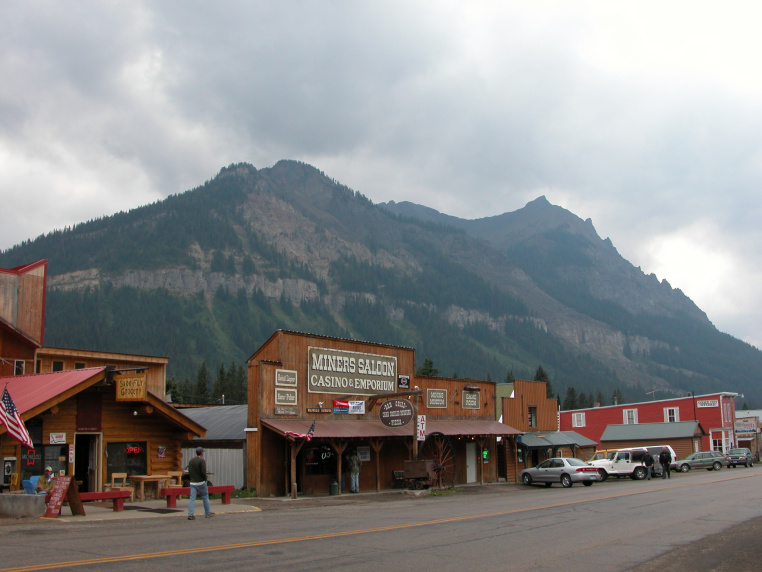 The Miner's Saloon is a popular watering hole in Cooke City, Mont., at the northeast border of Yellowstone National Park.

I love Montana’s many small museums and it looks like I’ll get to preview a brand new one next week in Cooke City, at the northeastern edge of Yellowstone National Park. I’ll be presenting my Humanities Montana Program, “Sidesaddles and Geysers,”  on Saturday, July 12, at 7:30 p.m. at Joe’s Campfire next to the Cooke City Community Center. Joe’s Campfire is part of the new Cooke City Museum and honors a park ranger who used to lecture there on nature and history. I’m thrilled to be carrying on Joe’s legacy.

The Cooke City Museum housed inside the Community Center won’t open officially until July 19, but I may get a preview. I sure hope so because its so much fun to see how colorful communities like Cooke City preserve and display their heritage.  And I know Cooke has an intriguing history.

Located less than five miles from Yellowstone, Cooke City is a mining town where gold was discovered in 1870. The park was created after that, so Cooke City and park history are entangled. The town is nestled in the rugged Beartooth Mountains and for decades the only way to get there was through Yellowstone Park. The Beartooth Highway that links Cooke City to Red Lodge, Montana, during summer months wasn’t opened until 1936.

The first bridge across the Yellowstone River was built to provide access to Cooke City. Miners from Cooke City built the first road to the park up Yankee Jim Canyon. In the 1890s, the notorious buffalo poacher, Ed Howell, used Cooke City as his base of operations. I hope I’ll find out lots more about the town next week.

My presentation, which is part of the Humanities Montana Speakers Bureau, focuses on women traveling to the park in the 1800s and early 1900s. I’ll begin with stories my grandmother used to tell about her trip to the park in 1909 and her grandfather’s trip there in 1883. Grandma went to the park with her aunt, two brothers and seven cousin. Family lore has it that they took a cow with them to provide milk for the younger children. Grandma told about baking bread in a hot spring and said her father tossed her uncle’s red flannel underwear into Old Faithful to die it pink.

Then I’ll tell stories about the first women to visit Yellowstone Park. These brave ladies literally rode sidesaddle through the roadless wilderness in the 1870s. One of the most chilling stories is Emma Cowan’s tale of being captured by Indians in the park. Emma and her family went there in 1877, the year the Nez Perce fled their homeland in hopes of finding freedom in the buffalo country. Emma wrote a gripping account of watching Indians shoot her husband, George, in the head, and leaving him for dead, taking her, her sister and their brother captive.

After recounting Emma’s story, I’ll slow the pace with a different kind of adventure—Eleanor Corthell’s account of leaving her husband at home and taking their seven children to the park in 1903. By then park roads were good and their was no danger from Indians. But Eleanor still had plenty to contend with while watching her children frolic near geysers and driving bears away from her cook fire.

Then I’ll tell the store of a treacherous climb down Uncle Tom’s Trail that nearly ended with a woman tumbling down the Grand Canyon of the Yellowstone. I’ll end with a bit of humor—the story of budding romance when travelers who met on a six-day coach tour have a tough time saying good-bye.

That should leave time for questions, and maybe an encore. After all, I have a collection of nearly 400 stories of early travel to Yellowstone Park that I could share.

Writer and historian M. Mark Miller is a former reporter and author of Adventures in Yellowstone: Early Travelers Tell Their Tales.