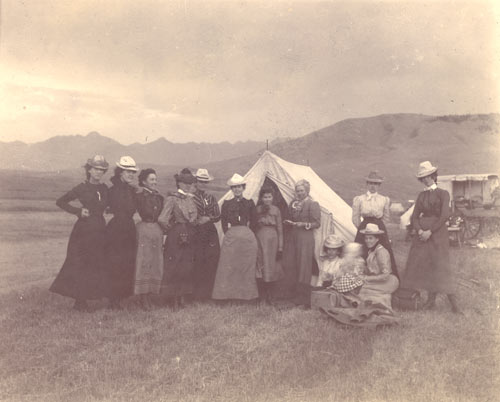 Some women stand around a tent in the Paradise Valley during a 1900 trip to Yellowstone National Park.

It’s easy to find descriptions of the wonders of Yellowstone Park like waterfalls, geysers and wildlife, but accounts of mundane daily activities are rare. This travel diary by Henry Isaac Jacobs of Bozeman, Montana, in 1900 is an exception. Here’s how Henry described preparations for the trip and the first day’s travel:

About the middle of July 1900 we had several relatives arrive here from the far east to spend their vacation among the mountains and breathe this fresh mountain air and drink the cool water and enjoy themselves for a month or so.

We had been talking of going through Yellowstone Park before they came. We thought now would be the time to get up a party to go and make our eastern visitors have a good time. So we talked it all over and found out it was favorable with everybody and invited those we wanted in our party and then commenced to prepare for a glorious trip. It was no small task to get everything ready as we had about thirty in our party and wanted to make everything as agreeable as possible for every body.

We boys got together and appointed different ones to see about differing things. And soon got the ball to rolling our way. We had quite a time securing a cook. We had made arrangements with a cook and was relying on him but something went wrong with him and he said he could not go. This being about a day or so before we left and it was pretty hard to get another to fill the place. But we kept a smile on our face and commenced to look for another.

We were about to give up. When we were stopped on the street by a gentleman that said he heard we were looking for a cook. He said he was an old hand at the business and would like the job. We found he was a Frenchman and understood his business all right and just the fellow we were looking for he demanded a good salary. We gladly gave it to him and this stopped our search for a cook. By the time our cook had prepared our provisions we were to use on the trip the rest of the boys had gotten the companies tents and all necessary article for us on our trip.

This being all they had to look after. Mr. Murphy and Mr. Bronx had arranged a party of about ten and was going along with us. This made a party of thirty or more. The time we had set to leave Bozeman on our trip was the first of August and it soon rolled around.

So the morning of the first of August 1900 we commenced to hustle around to get things ready and then gather up our crowd.

This is a fine morning and every body was feeling good. As we had several little things to see about that morning we didn’t get started until about ten o’clock. All the crowd get started but the three seater and we had a wilder horse and it took us quite a while to get him under control but finally we got started and went out of Bozeman singing and having a big time.

Every thing went well until we came near the entrance house and we had some dangerous places to go over on our trip. So two of the boys took our bronco and started with him in search of another and I stayed with the rig to see that nobody run off with the ladies. After a long and weary walk the boys came back with another horse that was more suitable for the occasion. We then hitched up and caught the rest of the party in rocky canyon. They were waiting for us to come to have lunch. Frenchie had everything ready.

We all sat along the side of the road and Frenchie served us our lunch with all his smiles. We had lots of fun eating out of our tin pans and drinking out of our tin cups. We got started rather late in the afternoon. Mr. Morgan told us to head for Mr. Maxeys ranch. So we did and had a nice drive. We reached there about seven o’clock as supper had to be prepared. So all the boys worked hard and soon got things under good headway. And we were soon ready for Frenchie to get supper. It was just about dark when Frenchie gave his first call for supper with his tin pan and knife. Every body was good and ready for supper and eats heartily for the first meal cooked on the trip.

After supper was over we had nothing to do but enjoy our selfs. As there was several target rifles in our party we had a good shooting as sport until is got so dark we could not see the sites and then we had to change to program.

The girls seemed to be enjoying them selves with a big jumping rope so we found them and played school kids for a while. As it was not cool enough for a campfire we all got together and sang songs until Mr. Maxey came out and wanted all the dancers in the house for a little dance. This just struck most of the party and so they accepted the invitation and got ready to go in. As we had a violinist in our party he went and furnished the music and every body present reported a good time. The dance broke up at an early hour and every body turned into camp.

Some of the boys had arranged their beds in Mr. Maxeys barn and some slept out in the open air but the most of us preferred being inside.

This being the first night out it was hard for us to get to sleep. We boys rolled and tumbled and could not go to sleep. Some of the boys suggested we get up and have a war dance. So we got up in our night robes. (This being about two o’clock.) And gave several wild war whoops and around the camp we went. After arousing all those that was trying to sleep we thought we would go back to our tents and try it again. It was already three o’clock this time and we made it out sleeping till six.