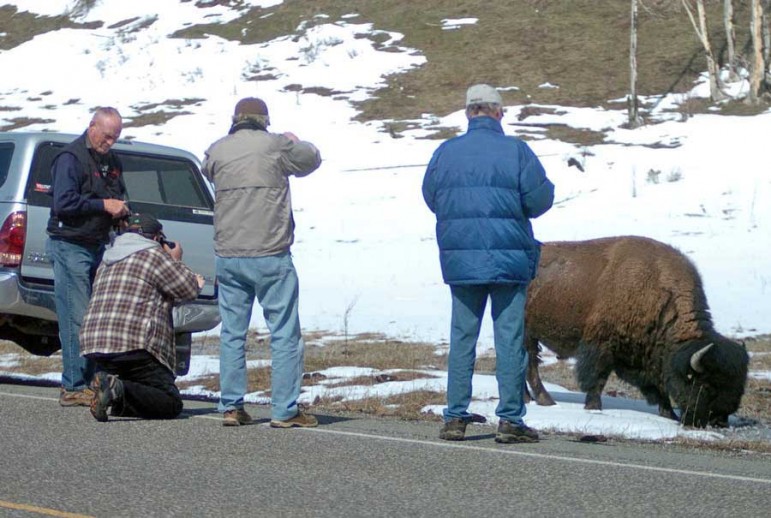 Visitors to Yellowstone National Park risk injury when allowing bison or other wildlife to approach within 25 yards.

A 43-year-old woman from Mississippi received minor injuries Tuesday when she turned her back on a bison to pose for a photo with it near the Fairy Falls trailhead in Yellowstone National Park. She is the fifth person injured after approaching bison this season.

The woman and her daughter were by the trailhead sign when they decided to take a picture with a bison that was approximately 6 yards away from them near the trail. When they turned their backs to the bison to take the picture, someone warned that they were too close, according to a statement released by the park’s public affairs office.

They heard the bison’s footsteps moving toward them and started to run, but the bison caught the woman on her right side, lifted her up and tossed her with its head. The woman’s father covered her with his body to protect her and the bison moved about 3 yards away. The family drove to the Old Faithful Clinic, where the woman was treated and released with minor injuries.

“The family said they read the warnings in both the park literature and the signage, but saw other people close to the bison, so they thought it would be OK,” said Colleen Rawlings, Old Faithful District Ranger. “People need to recognize that Yellowstone wildlife is wild, even though they seem docile. This woman was lucky that her injuries were not more severe.”

Park officials advise that Wildlife should not be approached, regardless of how tame or calm they appear. When an animal is near a trail, boardwalk, parking lot, or in a developed area, visitors must give it a wide berth and not approach it closer than the required minimum distances: 25 yards (23 m) away from all large animals — bison, elk, bighorn sheep, deer, moose, and coyotes — and at least 100 yards (91 m) away from bears and wolves.

Bison can run three times faster than humans can sprint, and are unpredictable and dangerous. Visitors are advised to give the animals enough space and alter their plans to avoid interacting with an animal in close proximity.

One thought on “Woman injured by Yellowstone bison while taking photos”