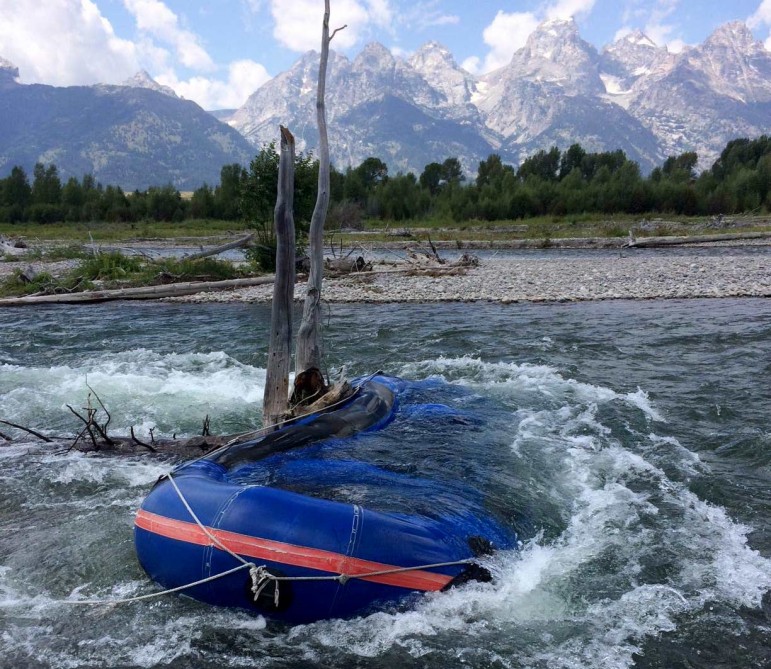 Portions of the Snake River in Grand Teton National Park can be difficult for beginning boaters to navigate.

After a recent spate of incidents on a stretch of the Snake River between Deadman’s Bar and Moose Landing, Grand Teton National Park Rangers are cautioning boaters to choose segments of river that are appropriate for their experience and ability level.

Rangers have conducted rescues on the Snake River near the Bar BC Ranch for at least five separate parties since August 1, 2015, according to a statement released by the park’s public affairs office. Officials caution that, even though nobody was seriously injured in the incidents, the consequences any accident on the Snake River has the potential to be catastrophic.

The Snake River in Grand Teton National Park does not consist of any significant whitewater, but it is a complex and unpredictable braided river. A strong current, shifting channels, numerous logjams, eddies, and snags all combine to make floating the Snake a challenging proposition.  These obstacles often require floaters to set up maneuvers well in advance, and inexperienced pilots often make maneuvers too late.

Rangers have assigned difficulty levels to the various stretches of river in the park. The section from Deadman’s Bar to Moose Landing, where all of the recent incidents have occurred, is rated “advanced.”

In all five incidents this month, rangers questioned whether the parties involved had the skill and experience to be floating an advanced section of river. Good alternative river segments include Pacific Creek Landing to Deadman’s Bar (rated “intermediate”) and Jackson Lake Dam to Pacific Creek Landing (rated “beginner”).

The five incidents fortunately did not result in significant injuries to those involved. However, the incidents did result in several minor injuries, damaged equipment, and a destroyed vessel. The five parties were respectively operating a canoe, a kayak, a raft, and two drift boats. Some of the visitors involved were local residents.

In some cases, the parties were able to free themselves from immediate danger, and were floated to safety by rangers. In others, rangers rescued the visitors hung-up on obstructions using swift-water rescue techniques. Grand Teton Lodge Company and Triangle X river guides assisted with two of the rescues.

Rangers urge all visitors planning to float the Snake River to select their river segment based on an accurate assessment of their group’s ability level. River information can be obtained at all park visitor centers. Both a park boat permit and a State of Wyoming Aquatic Invasive Species (AIS) decal are required before launching on any park waters. Additionally, all watercraft entering the park are subject to an AIS inspection when checkpoints are operating.