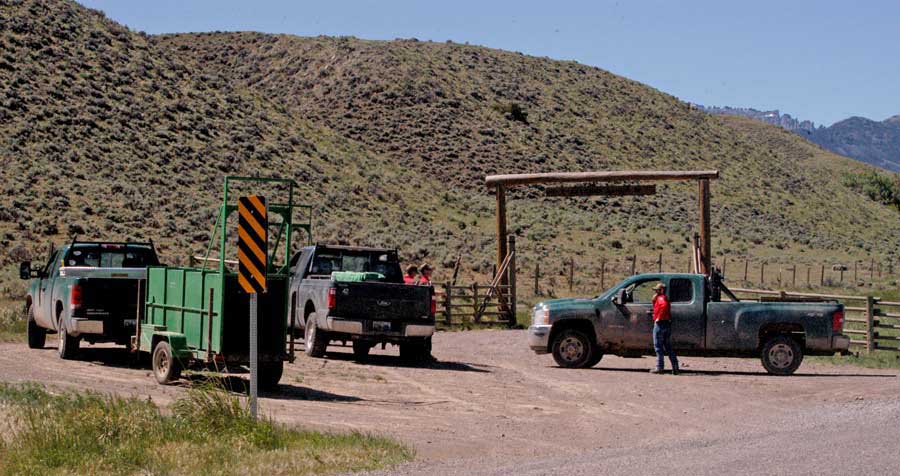 CODY, WYO. — A Cody man was hospitalized Thursday after being attacked early in the morning by a grizzly bear. The man was irrigating fields at his home 21 miles southwest of Cody, Wyo.

Nic Patrick, 63, was recovering from injuries sustained during the attack, including severe facial lacerations, said Lee Livingston, who was present near Patrick’s home Thursday speaking with Wyoming Game and Fish Department staff members.

Livingston, an outfitter and guide who also serves as a Park County Commissioner, said he had heard details of Patrick’s condition from family members, and that his comments were made only as an individual, not as an elected official.

Patrick’s injuries did not immediately appear to be life-threatening, and he would likely remain hospitalized for two or three days for observation and to guard against the threat of infection, Livingston said.

Patrick’s dog first stumbled into the bear, provoking a protective response from the female grizzly, which had two cubs with her at the time, said Alan Osterland, regional supervisor for Game and Fish.

Livingston said Patrick had defended himself with a shovel in an effort to fend off the bear.

“From what we know so far, it sounds like it was a chance encounter, and at some point the bear took after the man,” Osterland said.

Game and Fish specialists were gathered near Patrick’s home Thursday making preparations to trap the bear, although there was no immediate reason to believe the bear should be killed, Osterland said.

“We’ll want to try and identify the particular bear and find out does it have a previous history,” said Luke Ellsbury, a large carnivore specialist with Game and Fish who was preparing traps near the site of the incident Thursday.

Ellsbury said an abundance of green grass along the Upper South Fork of the Shoshone River makes the area attractive to elk, which in turn draws in the bears.

Newborn elk calves are particularly vulnerable for the first two weeks, and grizzlies know to “key in on the green grass” as a cue for the timing and location in hunting elk calves, Ellsbury said.

Luke Bell, a singer/songwriter who is working for the summer at the nearby TE Ranch, said he had seen a grizzly earlier in the season, but not recently.

“But we’re traveling in twos now,” said Bell, who had heard about the attack and stopped to check with Game and Fish workers to learn more about it.

Grizzly sightings in the area have been relatively common lately, including a recent report from the TE ranch where workers watched a mother grizzly with two cubs take down an elk calf.

Ellsbury said it was difficult to know for sure which specific bears were involved in each incident.

Unless the bear that attacked Patrick has a specific history that would identify it as particularly problematic, it’s most likely the bear will be relocated, along with her cubs, Ellsbury said.

But investigators are still piecing together all the details of the incident, he said.

Osterland said the U.S. Fish and Wildlife service would make any final decision before a grizzly bear is euthanized.

Patrick has been an outspoken advocate for conservation, and has served in the past as a board member for the Greater Yellowstone Coaltion, a nonprofit group that has pushed to maintain federal protections for grizzlies.