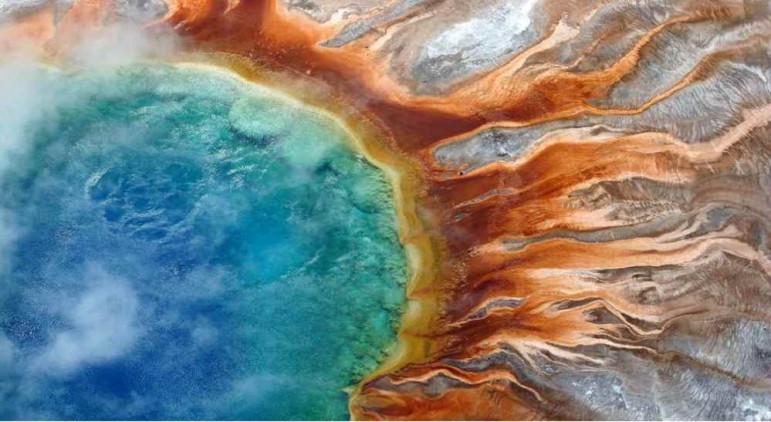 A report on the "vital signs" of Yellowstone National Park examines the health of wildlife and other resources, such as Grand Prismatic Spring.

A series of reports issued by Yellowstone National Park scientists offer an update the park’s overall “health,” including a look at climate change, wolves, bears, cultural resources and other key issues.

The latest Vital Signs report shows that the greater Yellowstone area may have reached its carrying capacity for grizzly bears, while elk numbers in the park’s northern range may be stabilizing after a decline.

In the Vital Signs report, park scientists and their cooperators report on data from more than two dozen indicators to study the influences, both inside and outside of the park, that affect Yellowstone’s overall ecological status and the condition of cultural resources.  Ecological indicators include ecosystem processes such as wildland fire, as well as the status of native species and stressors such as wildlife disease and non-native species.

This year, several indicators on the status of Yellowstone’s cultural resources were included.  As the world’s first national park, Yellowstone is home to an incredible collection of over 800 historical structures that help tell the story of transportation, lodging, and park management. The park also contains more than 1,600 known archeological sites that demonstrate evidence of at least 10,000 years of deep human connections with the ecosystems. Hundreds of thousands of historic documents, ethnographic artifacts, fossils, pieces of clothing, souvenirs, and works of art also reside in the park’s museum collections.

Highlights from this year’s Vital Signs report include:

• Climate:  Precipitation data suggest that we are still in a long-term drought.  Recent data support a continued trend of warming with average low temperatures increasing by 4.6 degrees since 1989.

• Bears:  Grizzly bear numbers appear to be stable in the GYE this year; supporting recent discussion that bears have reached carrying capacity in the ecosystem.

• Wolves and elk:  Elk surveyed along the northern range of Yellowstone continued to decline as a result of multiple factors, but show signs of stabilizing at a new low.  The number of wolves that spend most of their time in Yellowstone declined slightly.

• Bison:  The conservation of Yellowstone bison continues to be successful with population number s over 4,000 bison.

The 2013 Vital Signs report can be found online along with reports from the wolf and bird programs.