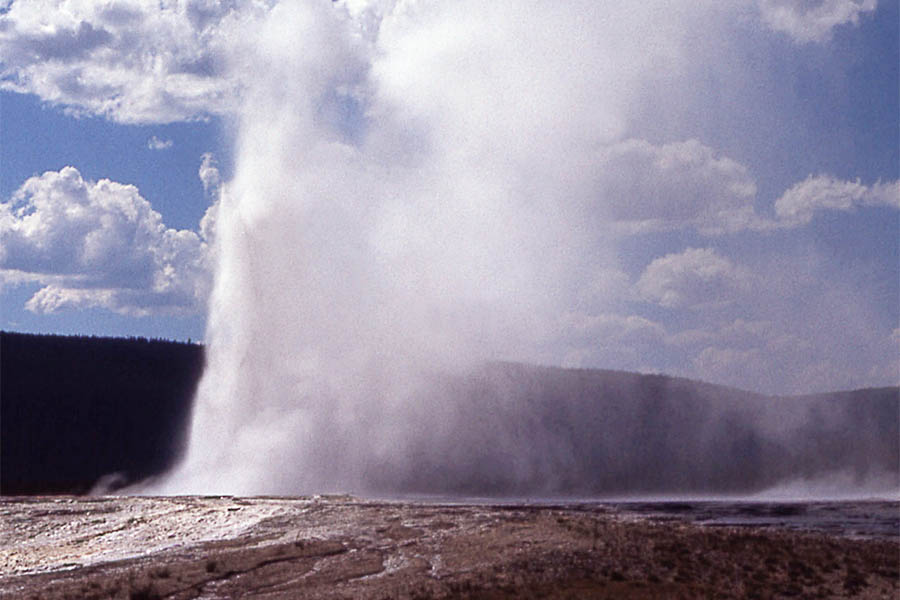 Giantess Geyser is seen erupting in a 1970 file photo from the National Park Service. Giantess eruptions often last more than a day and can often be heard from more than a mile away.

That was a text message that went out Wednesday to alert geyser enthusiasts everywhere that Giantess Geyser in Yellowstone National Park was in eruption (“ie”), setting off a frantic scramble among geyser gazers to go online and watch part of the rare and lengthy eruption.

Giantess Geyser had burst into life again after 2 years, 139 days and 12 minutes of silence. This was big news for geyser gazers and fans of Yellowstone. Normally, Giantess erupts once or twice each year, so the latest 2.4-year pause was one for the record books. Giantess is a favorite geyser among enthusiasts. Its eruptions can be heard a mile away and can last more than a day.

On Wednesday afternoon, the online chat room for the live-streaming webcam pointed at Old Faithful and other geysers in the Upper Geyser Basin quickly filled with people excited about news of Giantess—creating a virtual gathering of fans to witness the undisputed queen of Geyser Hill. The first hour and a half of the Giantess eruption can be watched online.

Giantess Geyser is one of Yellowstone’s largest geysers, with initial bursts reaching 200 feet. It can show four types of eruptions: water, steam, mixed and aborted. All are worthy of watching.

All four start with a bang. Giantess Geyser is one of the few geysers in the park that register on seismographs, conveniently giving an accurate start time.

The latest Giantess eruption seems to be a mixed eruption with series of outbursts happening about every 4o-60 minutes, still sputtering Friday morning, more than 40 hours since it started.

Giantess has been observed by gazers and instruments year-round since about 1920 except possibly during World War II. Its most recent dormant interval of 2.4 years appears to be the longest one in the last century.

Giantess is known to be linked to many, if not most of the thermal features on Geyser Hill, the crowded and active area surrounding Old Faithful. Most closely related is nearby Vault Geyser, which erupts anywhere from 1-8 hours after Giantess starts.

Other springs may show rare “sympathetic eruptions” when Giantess is active, including Ear Spring, located on the opposite side of Geyser Hill from Giantess. Ear Spring normally just bubbles and sizzles around the edge. But during Giantess eruptions, the water in Ear Spring has been documented to surge or well up 1-2 feet and vastly increase its flow.

Janet White is the creator of GeyserWatch.com and appreciates any reports on unusual or interesting activities by Yellowstone Park thermal features.

This story was corrected Feb. 1, 2014 to reflect the correct location of the Borah Peak earthquake in Idaho.