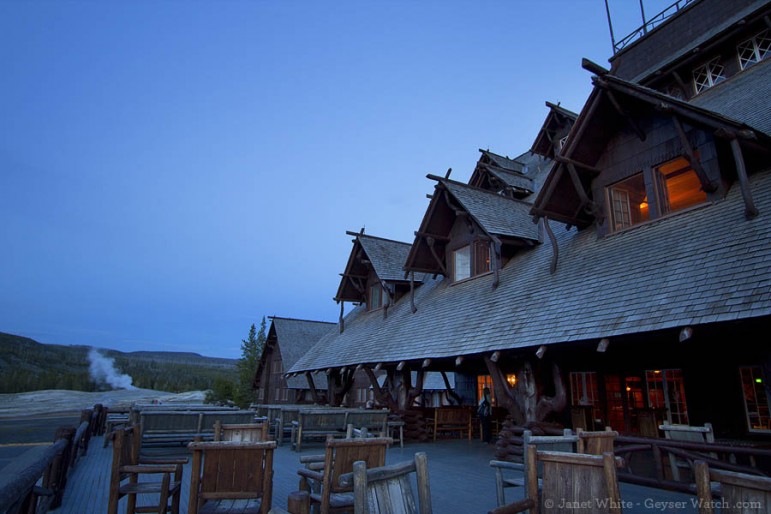 Xanterra Travel Collection operates the Old Faithful Inn and other hotels in Yellowstone National Park. They company announced Tuesday it will not begin summer operations until June 15. (Janet White photo)

CODY, WYO. — Yellowstone National Park’s primary lodging concessioner announced in an email to employees on Tuesday that it will not begin summer operations until June 15.

Xanterra Travel Collection—which operates several hotels, campgrounds and tour activities in Yellowstone—told employees that the company is “waiting for directives from the National Park Service” as it revises its timeline for summer operations.

Xanterra is the country’s largest park concessioner, operating in state parks and five national parks, in addition to Yellowstone. It relies heavily on seasonal employees who are housed in dormitories, cabins and other housing inside Yellowstone and other park properties.

The company had originally hoped to begin its summer operations on May 22, after Yellowstone, Grand Teton National Park and other parks were closed in an effort to reduce the spread of the COVID-19 virus.

The update to employees from Xanterra CEO Andrew Todd said the “decision was made with your safety and the safety of our guests in mind,” and acknowledged that many workers were furloughed or working reduced hours.

Todd cautioned that the June 15 date could include “limits on what services we can reopen due to social distancing requirements for our guests and employees.”

“Further, we recognize that when we do reopen, the way we operate and interact with our guests will look very different and we want to be prepared,” Todd said.

In a conference call on Monday with Wyoming civic and business leaders in Cody and Jackson, Yellowstone Superintendent Cam Sholly said the Park Service was still working on a plan for reopening the parks, and had not yet decided on a date.

He said housing workers safely would require giving each employee their own bedroom and bathroom, which would cut down on the total number of seasonal workers who could live in the park over the summer.

Sholly said having the park “open in May or June may be different from what open looks like in July or August.”

Denver billionaire entrepreneur Philip Anschutz acquired Xanterra in 2008, and the company signed a 20-year contract worth at least $2 billion in 2013 to continue operating Yellowstone’s hotels and related tour activities.

One thought on “Yellowstone lodging concessioner delays operations until June 15”