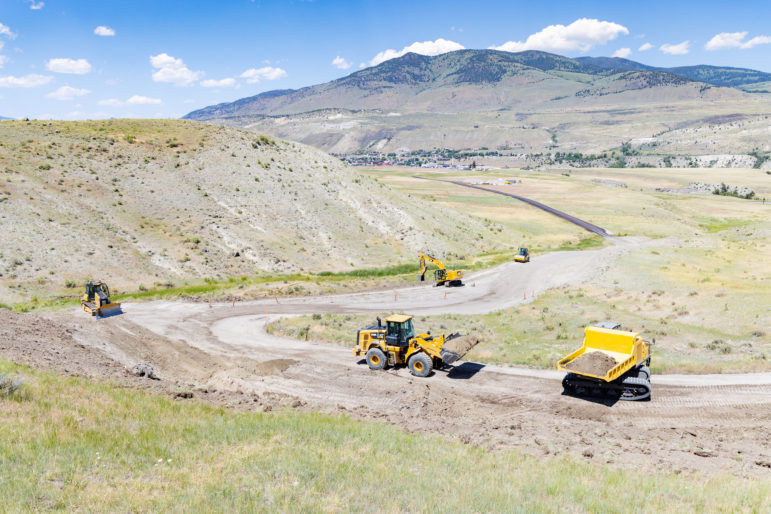 Heavy equipment lines the Old Gardiner Road as improvements continue in the wake of June flooding that closed broad sections of road leading from the Montana communities of Gardiner and Cooke City into Yellowstone National Park. (NPS photo/Jacob W. Frank)

CODY, WYO. — The north and northeast entrances to Yellowstone National Park could reopen to general visitor traffic as soon as mid-October if repair work runs according to schedule.

Sholly also reassured residents of the isolated alpine communities around Cooke City that they would be able to drive to either Gardiner, Mont. or Cody, Wyo. “no matter what happens” with repairs.

Torrential rains and melting snow in mid-June washed out broad sections of the roads leading from Gardiner and Cooke City into the park, leaving those entrances closed and their tourism-dependent economies struggling with devastating economic losses.

Sholly said Monday that he has reviewed plans for repairing both roads and has a high confidence level that fixes can be made by contract deadlines of October 15.

“I think we’re going to be able to execute this,” he said. “I know how important it is to everyone.”

Sholly cautioned that the weather might pose the only major unexpected snag in plans, and that heavy snows in September could derail construction schedules.

But he was scheduled to meet this week with the directors of the departments of transportation from Montana and Wyoming to agree on a plan for plowing an 8-mile section of U.S. Highway 212 east of Cooke City known as “the plug” if repairs could not be completed in time.

For decades, the National Park Service has plowed the Northeast Entrance Road through the Lamar Valley, connecting Gardiner and nearby park headquarters in Mammoth Hot Springs, Wyo. to the remote mountain communities of Silver Gate and Cooke City, which lie just outside the park’s Northeast Entrance.

The Wyoming Department of Transportation and Park County, Wyo. have traditionally plowed the Chief Joseph Scenic Highway and a section of U.S. Highway 212 to Pilot Creek, a little more than 4 miles south of the Montana border and just over 8 miles southeast from Cooke City. That has allowed snowmobilers coming from Wyoming to use a parking area at Pilot Creek for parking trucks and trailers, and the 8-mile section of unplowed road to access a network of backcountry trails in the Beartooth Mountains around Cooke City.

A newly formed group of regional residents and business owners met last week to advocate for plowing the plug and ensuring continued snowmobile access to trails in the area. The Park Access Recommendation Committee (PARC) expressed concerns last week about repair timelines before Sholly’s announcement Monday, and outlined a goal of building a broader winter tourism economy across the region, connecting the Montana communities of Gardiner, Cooke City and Red Lodge with Cody, Wyo.

Sholly dismissed a rumor Monday that the Park Service might stop plowing the Northeast Entrance road if Montana and Wyoming plowed the plug.

“This is the first time that’s ever been brought up to me, and I have no intention, no matter what happens, of shutting down access to Yellowstone from Cooke City in the winter,” he said.

PARC members said Monday they still plan to meet with state and local officials later this month to make sure the plug is plowed, regardless of the status of road repairs.

“This is about our future economic survival,” PARC organizer Terri Briggs said after Sholly’s conference call. Briggs is the owner of the Big Moose Resort and president of the Cooke City Chamber of Commerce, and said the community “has got to start growing our winters here.”

“Things just keep dwindling in the winters,” she said, “and with the summer we’ve had now, a lot of businesses aren’t going to make it if we don’t do this.