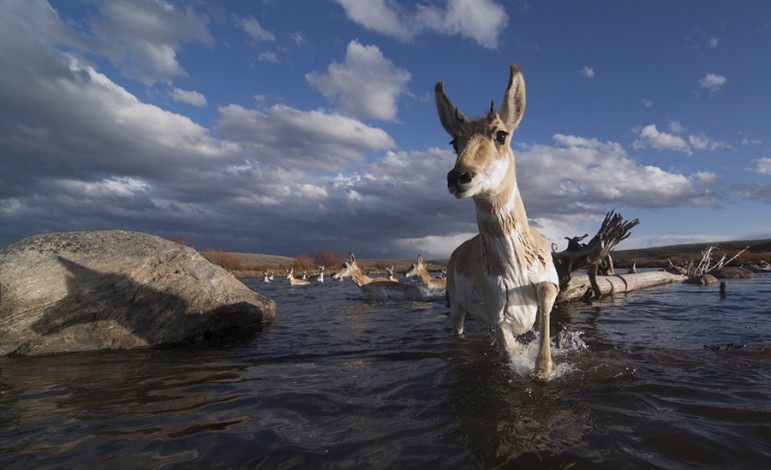 Plains dwellers are familiar with the view of pronghorn antelope streaking across sagebrush flats and low grassy hills—camouflaged blurs racing on rawboned limbs at speeds upwards of 60 mph.

Yet there’s another view of this marvelous critter: fording swift rivers and scrambling up dusty mountain trails. That’s the view of some rare souls who have tracked a pronghorn migration between Grand Teton Park and the Green River Basin.

When autumn comes to Wyoming, several hundred pronghorn make the arduous journey from their summer birthing grounds in Jackson Hole to the high desert south of Pinedale, where rich forage awaits them. And then each spring they travel the same 170 miles back to Teton Park on the “Path of the Pronghorn.”

Motivated by their passion to bring this story to the world’s attention, the photographer/writer team of Riis and Ostlind, two University of Wyoming grads, launched what would become a three-year project to document one of the most exceptional land-animal migrations in the continental U.S.

“It seems like they transcend time,” said Riis, commenting on his favorite photo of a pronghorn pausing in a sun-stroked pond. “That was perfect light. The shadows were a gift. The animals gave a gift.”

The pronghorn migration across Wyoming, second in the Western Hemisphere only to the Arctic caribou migration, demands swimming through five major rivers and across a 9,100-foot mountain pass. Other obstacles are man-made highways, fences, subdivisions and natural gas extraction fields.

In addition to their natural curiosity to witness pronghorn making this trip, the Pronghorn Passage partners felt that showing the migration through the eyes of the animals could help lead to conservationist solutions to safeguard the critical corridor for generations to come.

While it’s impossible to quantify the influence of Pronghorn Passage on revolutionary improvements advanced to assist the migration, the project has won acclaim for shaping human perceptions which undoubtedly co-mingled with and helped spur on longtime conservationist goals.

“I would use remote camera systems and hike for miles to find the perfect spot because I wanted to show the pronghorns in motion,” Riis says. “I wanted to inspire people to care about it and know about it.”

Fascinated by wildlife since childhood, Ostlind experienced a number of nearly transcendent encounters which afforded her rare glimpses of wild animals on the move that she could share with her intended audience as a writer.

“It’s a window into a secret world that we’ve cut ourselves off from,” she notes. “To be able to do that is thrilling.”

Her highlight from two years exploring the backcountry route came during a sort-of cat-and-mouse engagement with a group of pronghorn that streamed past her one evening, maybe 20 yards away, huffing and crunching through the snow before moving into the night.

By daybreak the next morning, the pronghorn had gotten up ahead of her, but they dallied over a wolf-killed deer carcass long enough that she gained the advantage again and took the lead. 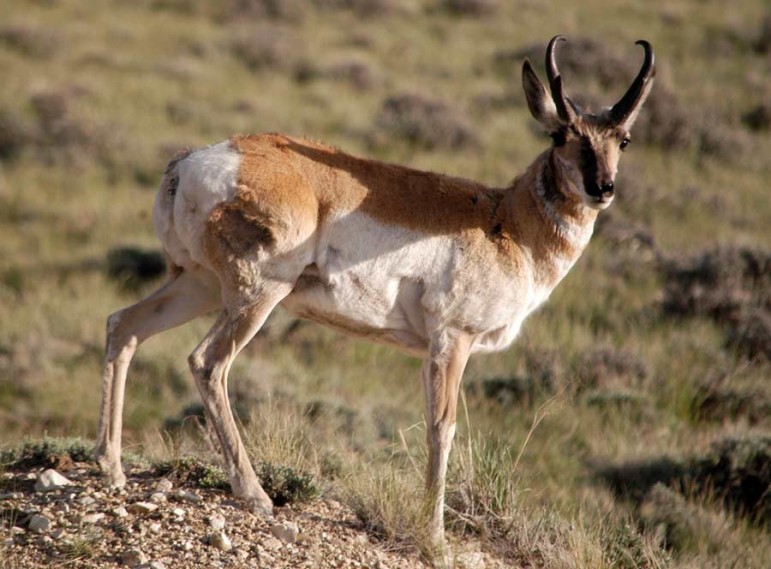 A pronghorn watches from a safe vantage near Sheep Mountain west of Cody, Wyo.

“It was a beautiful evening, and I was looking down at Fish Creek and the sunlight was slanting through. I realized a huge group had been hunched down in the sagebrush. At first there were 15 or 20, then there were over a hundred trotting and running, wanting to cover a great distance. In that moment I saw the center of the migration in full force.”

While the nature writer was crafting words to portray the migration, Riis was scuttling about on his knees jamming tripods in the dirt, tweaking camera angles and setting the remote mechanisms of his “camera traps.”

The photographer wanted more than pronghorn pictures, he wanted in-motion pictures of this native North American hoofed animal traversing waterways and rocky knife-cut banks on the quest for food and calving grounds during the course of 20 million years of seasonal survival.

Favoring wide-angle views, Riis needed pronghorn to get within 3-5 feet of his remote sensing cameras to even trip the shutter. After a year of scouting the pronghorns’ travel habits, Riis developed good strategies, but could still spend a week on each setting, “mining the trail” with cameras in anticipation of about 10 good images out of 1,000 frames.

“I wanted to show them just being pronghorns and not responding to our presence. I wanted pictures that made it look like you have a front-row seat.”

Riis, a National Geographic Young Explorer, is developing a series of photo chronologies on the subject of migration. He’s working on mule deer now and has plans to follow that up with elk. To his knowledge, no photographer has pursued that special interest with a dedicated long-term focus.

“You can’t just show up and photograph them,” Riis notes. “You have to spend a year or two, in both the spring and the fall, to show migration.”

Ostlind continues to spring more documentary writings out of the project at the same time she reflects on great strides that have been made on behalf of pronghorn by wildlife conservationists, highway designers and ranchers. 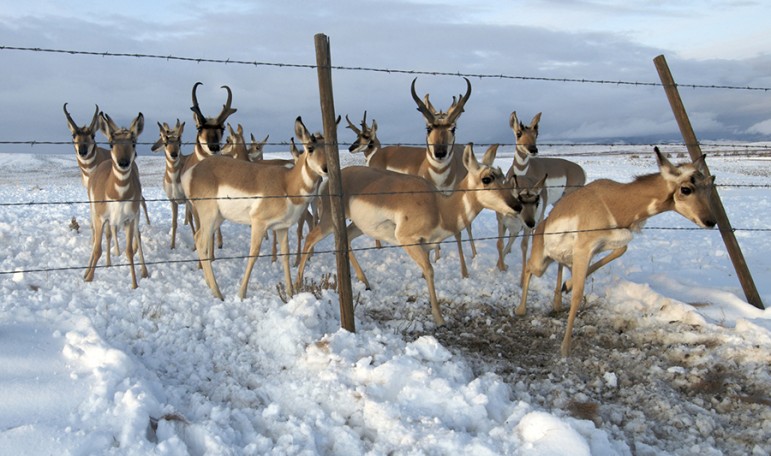 Pronghorn negotiate a barbed wire fence during their Wyoming migration.

One Riis photo of a pronghorn with his leg stuck between the top two strands of a barbed wire fence draws attention to a very simple solution. Pronghorn are designed to move straight ahead at warp-speed but are not equipped to leap over barbed wire like deer. So they must kneel down and squeeze underneath the bottom strand. Solution? A barbless bottom wire positioned at least 16 inches above the ground.

Around Trappers’ Point, an area rich in water and forage, the arcs of the New Fork River and Green River form a natural geographic bottleneck, Ostlind wrote in High Country News. Antelope reaching this spot face the added obstacle of a barbed wire fence and Highway 191 streaming with traffic six miles west of Pinedale.

It was a sure setup for disaster. But by November 2012 the Wyoming Transportation Department had invested $10 million to build a major highway overpass, six underpasses, and one more overpass to accommodate the 3,000 pronghorn and 2,000 mule deer that converge between Pinedale and the Daniel Junction.

The Jackson Hole News reported at the time that the first-ever overpass system in the world designed specifically for pronghorn met with tremendous success as the pronghorn, a bit skeptical at first, reveal a decided preference for the over-highway route rather than braving the highway head-on.

“Joe and I have given a lot of presentations statewide and the main reaction has been one of ‘surprise'” Ostlind recalls. “There was way more interest than I imagined, and I think it has helped raise awareness.”