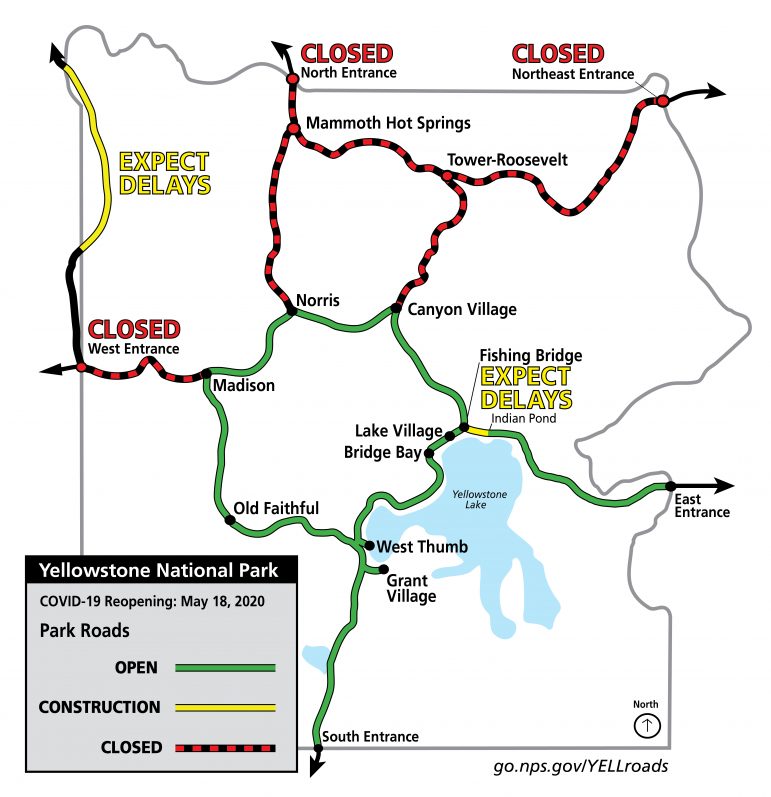 Yellowstone National Park will open its South and East Gates on Monday, May 18.

CODY, WYO. — Yellowstone National Park is set to reopen at noon on Monday, May 18, but only through the south and east entrances located in Wyoming. The park’s other three entrances, all in Montana, will open later, at a date to be determined in cooperation with Montana officials.

Early park visitors expecting to catch a glimpse of grizzly bears or Old Faithful Geyser should pack a lunch, as self-serve gas stations and public restrooms are the only services available during what the National Park Service is calling Phase 1 of what will be a phased reopening.

Superintendent Cam Sholly said he wants to follow a slow and cautious approach Wednesday, speaking on a conference call with business leaders and elected officials in gateway communities that rely on park visitors for a large portion of their local economies.

Initially, only the lower loop of Yellowstone’s Grand Loop Road will be open, allowing access through Jackson and Cody to Grant Village, West Thumb, Old Faithful, Madison, Norris, Canyon, Fishing Bridge, Lake and Bridge Bay. Roads west of Madison and north of Canyon and Norris will be closed to public travel.

Sholly had said in April that he was hoping for consensus from the states of Idaho, Montana and Wyoming—along with health officials in five counties. But he acknowledged that counties are seeing varying rates of COVID-19 infections, and a staggered approach to opening park entrances may have some advantages.

“I would prefer that it’s not just a light switch and the park is open and we get inundated and overwhelmed,” he said.

Limiting entrances and services is “not a long-term solution, but it can help inform all of us better in relationship to how we end up opening all five entrances,” he said.

Sholly said he will defer to Montana Gov. Steve Bullock on when to open entrances in Gardiner, West Yellowstone and Cooke City, but that he didn’t think Montana was “far behind” Wyoming on opening dates. Wyoming recently lifted quarantine orders for travelers, while they remain in effect in Idaho and Montana.

About 97 percent of Yellowstone is located within Wyoming, but roughly 70 percent of the park’s summer visitors enter through Montana, primarily at Gardiner and West Yellowstone. May is typically the least busy of the summer months through September in Yellowstone.

Sholly said he has received no political pressure on the decision to reopen, but he acknowledged the economic urgency of opening a park that drives more than $1 billion in regional tourist spending.

“We still have four very solid months in front of us,” he said. “If we do it right, we can still have a very good year economically.”

Sholly said he will be relying on visitors to take responsibility for their own social distancing, and that he won’t ask rangers to risk their safety to separate people across a park of more than 2.2 million acres.

“We need the public to partner with us to protect each other,” he said.

Social distancing will be managed in “certain areas more than others,” but visitors must keep their distance from each other throughout the park, he said.

Beginning May 18, visitors entering through the South and East Gates will be able to access restrooms, self-service gas stations, trails and boardwalks. Commercial tour buses will not be allowed in the early phases of opening. Overnight accommodations will be unavailable until later in the season.

The Park Service will eventually consider opening additional facilities and services under Phase 2, but no decision has been made on when that will happen.

Hotels, full-service dining, commercial tour buses, and ranger programs will remain closed until Phase 3, which will occur only when health conditions allow.

Park officials said visitors should come prepared to follow all Centers for Disease Control and local health guidance by practicing good hygiene and social distancing. Face coverings are recommended where social distancing is not possible. People who are sick should stay home and not visit the park.

Residents in gateway communities have expressed a range of opinions on reopening Yellowstone and adjacent Grand Teton National Park. Many are anxious to start the summer tourist season. Others are concerned that arriving visitors from across the country might spark new clusters of virus cases.

Wyoming Gov. Mark Gordon had asked Sholly to reopen Yellowstone, and praised the plan unveiled on Wednesday as a move that will “help reawaken Wyoming’s tourism industry and help get America’s economy up and going again.”

While Yellowstone typically staggers its spring opening dates over a few weeks in May, based on snow plowing operations, the park hasn’t operated before for an extended period with gates in one state open while closed in another.

The move presents a scenario that could see Wyoming capture some additional early season tourism spending normally bound for Montana. But Montana officials are sure to be watching how the phased opening affects COVID-19 conditions in Wyoming as they consider plans for opening Montana gates to the park.