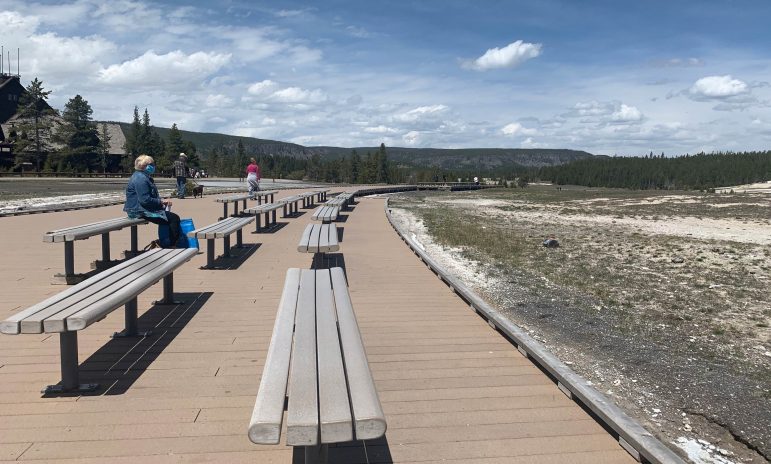 A woman wearing a mask waits for Old Faithful Geyser to erupt Tuesday, the first full day this season that Yellowstone National Park has been open to the public. Yellowstone Gate photo/Ruffin Prevost

OLD FAITHFUL, WYO. — Grand Prismatic Spring is a favorite attraction in Yellowstone National Park. The largest hot spring in the U.S., its rainbow colors are a natural wonder that draws such large summer crowds that the parking lot overflows onto the road, and tourists stand three rows deep along the boardwalk, straining for a glimpse.

On Tuesday morning, Jeremiah and Ashley Meyer had Grand Prismatic Spring all to themselves.

The Star Valley, Wyo. couple are Yellowstone regulars, and like many other locals, have made a tradition of trekking to the park when it first opens each summer, often staying at the Old Faithful Inn.

The Inn was the site of one of their first dates, and they have returned several times over the last dozen years, often staying in the same room, where they can watch Old Faithful Geyser erupt from their window. But in all their trips to Yellowstone, they had never had a private view of Grand Prismatic Springs.

“For nearly a half an hour, we were the only ones there. It was amazing,” Jeremiah said. “We were just blown away.” 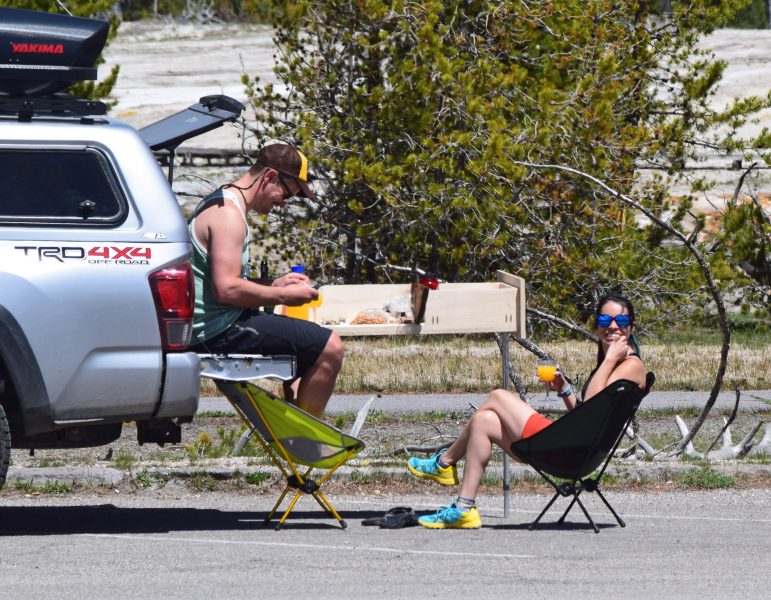 Only the South and East gates into Yellowstone were open Tuesday, the first full day the park has been open this season, as Montana continues to quarantine out-of-state arrivals. So crowds, while sizable in some places, were at times limited compared to a normal spring opening, which usually falls on a weekend and sees visitors streaming in through five gates.

That put some pressure on the Wyoming gates serving Jackson and Cody, where new, minimal-contact payment processing systems were in place as part of efforts to prevent the spread of the COVID-19 virus. Only restrooms and self-service gas stations are open, and public traffic is allowed only on the lower loop of the Grand Loop Road.

The limited access didn’t seem to bother many visitors, including Jill Craig and her boyfriend, Nate Kieffer, who were traveling from California with Craig’s father on a road trip that included stops in Utah, Colorado and Idaho.

The group had seen a moose in Grand Teton National Park and were hoping to next see a grizzly bear as they were leaving Artist Point in the Grand Canyon of the Yellowstone River. 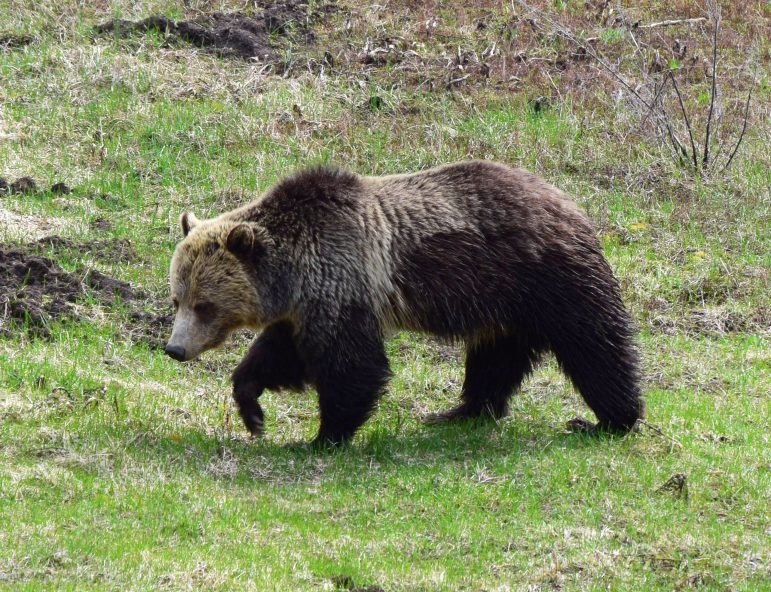 A grizzly bear in Yellowstone National Park digs for tubers Tuesday in a clearing near the East Gate. Yellowstone Gate photo/Ruffin Prevost

Craig’s father, who declined to give his name out of concern his employer might require him to quarantine upon return, jokingly said the view of the Lower Falls “was worth risking my life for. That’s a bucket list view, and this is my third time here.”

The trip to Yellowstone was Kieffer and Craig’s first, and was during what was scheduled to have been Craig’s graduation from nursing school. But her classes were closed after the viral outbreak, and she must now repeat her final semester in the fall. The trip was a chance to get outside after a long time in lockdown.

Like most visitors in the park Tuesday, the three weren’t wearing masks, but took what they called common-sense precautions, including keeping their distance from other visitors.

“We have never felt like we’ve put ourselves in jeopardy,” while traveling, Kieffer said. “We’ve been doing a lot of things outdoors and staying away from crowds.”

Whether the normal summer crowds will show up in Yellowstone this summer remains a matter of concern in gateway towns that rely on tourist spending for a major portion of the local economy.

If Tuesday is any indication, a strong contingent of out-of-state visitors are eager to visit Yellowstone, as evidenced by a majority of license plates from far-flung destinations.

A group of bighorn sheep rams in Yellowstone National Park rest on a hillside between Sylvan Pass and the East Gate on Tuesday. Yellowstone Gate photo/Ruffin Prevost

The Wyoming towns of Cody and Jackson stand to see a short-term boost to their tourism economies, as overnight lodging is not yet available in the park, and the Montana gates remain closed. Park managers have said they will coordinate with Montana officials on when to open gates in Gardiner, West Yellowstone and Cooke City.

Meanwhile, some locals and regular visitors sheepishly confess they wouldn’t mind a quieter, scaled-back summer in Yellowstone, which hosts 4 million annual visitors, most arriving between June and September.

“We always have a picnic basket and a blanket, and it’s more fun to be here when it’s not so crowded,” said Kathryn McFarlane, who made the trip from Tennessee to visit her mother, Mildred Haynie, for Mother’s Day. Jim Wildman, Haynie’s son, joined his sister and mother in Yellowstone on Tuesday after traveling from Ohio.

“Coming from Ohio, I’m less concerned about being here because there are less people and they’re farther apart,” Wildman said. “Plus, I’ve never been here this early, so it’s fun to see the lake still frozen and all the snow.”

Haynie, 99, lives south of Cody and for years has been the driver and tour guide. This year, she was content to let the kids take the wheel.

McFarlane said she wasn’t worried about being limited to the lower loop, and was confident their day in the park would yield wonders without too much planning or worrying.

“Yellowstone will provide. It always has something wonderful,” she said. “You just have to be aware of it all.”

One thought on “Early visitors eager to make Yellowstone pilgrimage”