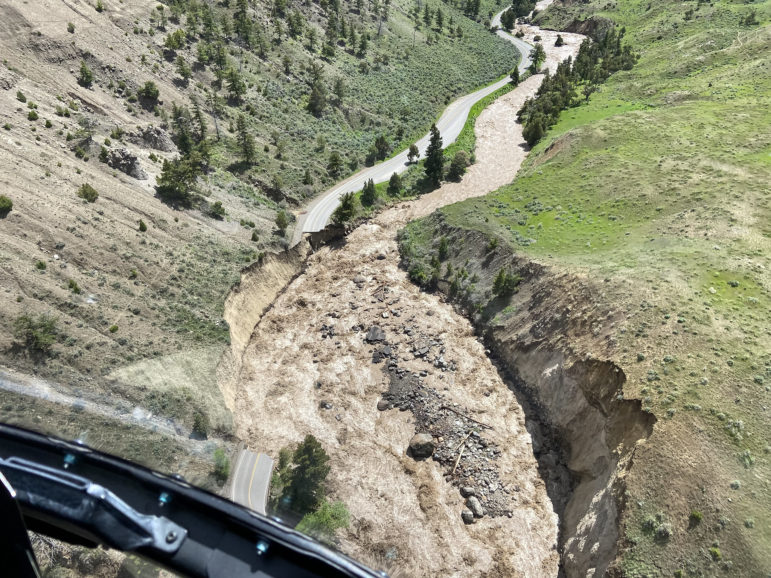 A still from video footage capture from a helicopter shows one of several spots where flood waters washed out Yellowstone National Park’s North Entrance Road between Gardiner, Mont. and Mammoth Hot Springs, Wyo.

CODY, Wyo — Emergency crews in Yellowstone National Park and surrounding communities scrambled on Tuesday to reopen roads and restore utility service in isolated areas cut off by historic floods that forced the first summertime disaster closure of the park in more than three decades.

Yellowstone Superintendent Cam Sholly said in a press conference Tuesday that it is unlikely that the road from Gardiner, Mont. into the park and on to Cooke City, Mont. will reopen this year. That would put popular attractions like Mammoth Hot Springs and the unparalleled wildlife range of the Lamar Valley off limits.

It will probably be about a week before visitors are allowed back into Yellowstone, with traffic confined at least for some time to the southern loop, Sholly said. Once that section reopens, visitors will still be able to access Old Faithful Geyser, Yellowstone Falls and most of the park’s hot springs and other thermal features, along with abundant wildlife and scenic vistas.

If tourist traffic remains steady this year, a combined total of more than 516,000 vehicles that used the park’s two northern entrances in 2021 would have to use one of its other three gates this year. Sholly said the Park Service will likely explore a timed-entry or reservation system. Sending normal peak traffic through half the park’s roads would be “a disaster waiting to happen,” he said.

The upheaval followed one of the region’s wettest springs in many years and coincided with a sudden spike in summer temperatures that has hastened runoff of melting snow in the park’s higher elevations from late-winter storms.

Record flooding and rockslides prompted park officials on Tuesday to close all five entrances to Yellowstone to inbound traffic for the first time since catastrophic wildfires roared through the area in 1988.

No deaths or injuries have been reported, and Sholly said all visitors have been evacuated from the park except for a few backcountry hikers, whose locations are known.

At the request of local law enforcement agencies, the Montana National Guard sent helicopters to assist in search and rescue efforts in the small towns of Roscoe and Cooke City.

Gianforte said in a statement that rapid snowmelt and recent heavy rains have brought “severe flooding that is destroying homes, washing away roads and bridges, and leaving Montanans without power and water services.”

“I have asked state agencies to bring their resources to bear in support of these communities,” he said.

The only road out of Gardiner, home to approximately 900 people, including many park employees, was partially cleared Tuesday, after multiple rockslides and washouts had isolated the community. Residents and visitors were allowed out, while only delivery and emergency traffic was allowed in.

Floodwaters along the Yellowstone River were nearly a meter higher than their previous record highs measured more than a century ago, according to the National Weather Service.

Officials were still seeking to assess the condition of roads and bridges that wind through Yellowstone park and around Yellowstone Lake, the largest alpine lake in North America.

Covering a surface area of 132 square miles, an area roughly the size of Las Vegas, the lake is fed by more than 141 rivers and streams, with its only outlet flowing north into the Yellowstone River.

The winding North Entrance Road between Gardiner and park headquarters in Mammoth Hot Springs, Wyoming, was carved away in multiple places by surging floodwaters. Sholly said the Park Service will have to study whether to rebuild the road along the same route or seek a different path less vulnerable to future flooding. 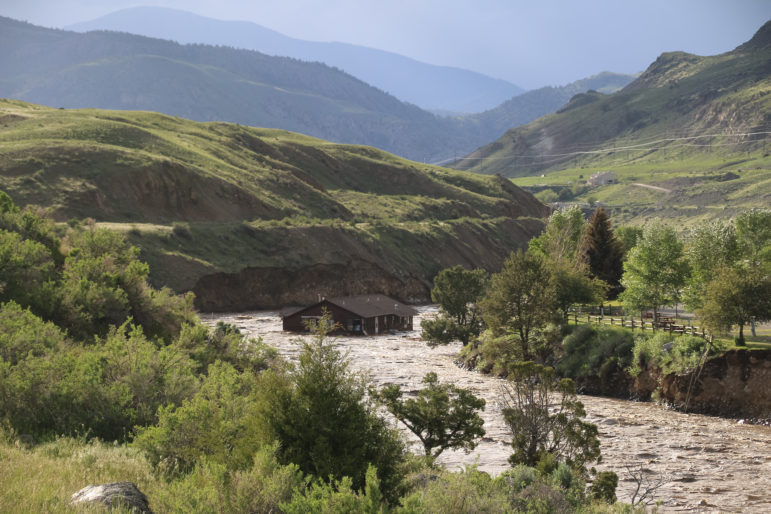 A six-person housing unit in Gardiner, Mont. that was home to Yellowstone employees floats down the Yellowstone River after it was evacuated hours earlier.

Closing half of Yellowstone for the season will be a seismic shockwave for its devoted visitors, as well as the gateway communities that cater to them.

The world’s first national park and one of the most popular outdoor destinations in the U.S., Yellowstone hosts 4 million visitors each year. Its $159 million budget for fiscal year 2021 helps maintain more than 1,500 buildings and 450 miles of road.

During peak summer season, up to 750 Park Service employees work in Yellowstone, along with 3,500 concessions workers who staff the park’s nine hotels and other guest facilities like restaurants and gift shops.

Sholly said a six-person housing unit in Gardiner that was home to Yellowstone employees was evacuated Monday morning, just before it was swept into the Yellowstone River later that evening. Footage posted to social media captured the building floating down the raging river, a trip that Sholly said spanned 8 kilometers.

Bill Berg, a longtime Gardiner resident and a Park County Commissioner, said in a press conference Tuesday that it was difficult to overestimate how tough it will be for local businesses cut off from the park and its tourist dollars. He encouraged park lovers to make future reservations and purchase gift certificates, as many did to support businesses during COVID-19 shutdowns.

In Red Lodge, a picturesque Montana resort town that’s a popular stopover for Yellowstone visitors, flood waters on Monday rushed out onto the main street, flooding downtown homes and businesses.

“Oh, gosh, I worry to think what it’s going to mean for business here this summer,” said Alice Fouts, who works at a wine shop in downtown Red Lodge. “Everyone’s just still trying to process this. It’s all so sad.”

Mike Darby, owner of the historic Irma Hotel in Cody, Wyoming at Yellowstone’s East Gate, said two years of COVID-19 travel restrictions followed by record high gas prices and spiraling inflation “have just been the perfect storm—and now we have this devastation in the park.”

Darby said he expects that people in gateway communities will band together to help each other and visitors navigate an uncertain season, much as they did during the 1988 fires.

“People love Yellowstone, and no matter what happens, it’s not going anywhere,” he said. “It’s always going to that special place for so many.”